Evidence for God: The Great Pyramid 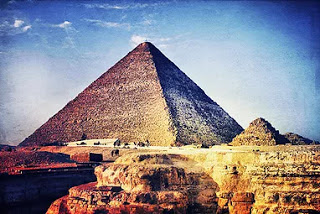 According to Scripture, an altar in the land of Egypt will be one of God’s witnesses in the end times:

This altar is said to be on the border, but yet in the middle. There is only one spot on the face of the earth that complies with both of those conditions, and that is the exact spot where the last remaining wonder of the ancient world—the Great Pyramid—stands! The Great Pyramid is situated in Giza: “Giza” means “border” and it is at the border of Upper and Lower Egypt. Therefore, it is also in the middle of Egypt.

Interestingly, the total numerical value of the verse above is 5449, and the height of the Great Pyramid, from its base to its summit, is 5,449 Pyramid inches. Just a coincidence?

For thousands of years, the Great Pyramid has remained a mystery to science. There were no hieroglyphs inside when the Great Pyramid was first opened, no mummies or treasures either, it was empty. Nothing could positively identify the builder with any certainty. It remains an architectural marvel still unexplained as to how it was engineered with technology from literally a different age—it has long been known that our ancestors around 4,600 years ago would have been unable to physically build the ancient Pyramids of Giza. For instance, how did the ancient Egyptians stack over two million stone blocks, each weighing up to 30 tons, on top of one another with nothing but stone and copper tools? And, how were these 30-ton stones cut with laser precision, and fit with a gap of 0.02 inches between them, that not even modern technology can replicate?

Scientists also cannot explain how the ancient Egyptians knew measurements which were discovered more than thousands of years later. For example:
1. The base length of the Pyramid is 365.24 Cubits, defining exactly in days the time of one revolution of the earth around the sun, or a Solar Year.

5. Modern computers estimate the volume of the earth's crust above mean sea-level to be approximately 455 feet. The top of the Pyramid as the builders left it, unfinished, is fully 454 1/2 feet.

9. The Great Pyramid faces true north with only 3/60th of a degree of error!