(Before reading any further, make sure you've read Part 1! You can read it here.)

It is believed that the three biggest pyramids at Giza, including the Great Pyramid, were built to last until the time of the end by the Sethite descendants of Enoch, as per Josephus' historical witness. Check out the AMAZING correlations between the layout of the three main Giza pyramids and the planets: Venus, Earth, and Mars!

Consider the distance of the three planets from the Sun (semi-major axis):
We will call the location marked on the map below, as a red sphere, the 'Sun Point': 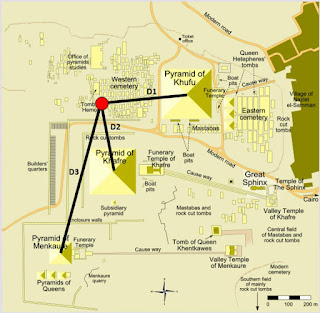 From this point, the distance to the centers of the three pyramids are:
The pyramids correspond to the planet's volume and distance from the sun with only the slightest variation (0.4%)! Without modern technology, it would have been impossible for a mere human being to know such measurements thousands of years ago. The only possible explanation is God.

Robert Menzies (1865) thought that the various passages were constructed according to a chronological scale of a geometric inch to a year. For example, if you start at a certain point in the descending passage, which is represented by a certain year, than every inch you move represents one year forward. Major landmarks in the pyramid seemed to correlate with major historical dates!

Moving down the descending passage to the exact beginning of the ascending passage is a distance of 688 inches. If each inch represents one year, we are at 1453 BC (2141 BC – 688 = 1453 BC). Coincidentally, this year is the date of the exodus of the Israelites from Egypt!

The horizontal base of the triangle in the Pyramid is 30,043 inches, or 3,469 inches short of the crucifixion, which corresponds to the date of October 14, 29 A.D., likely the date of Christ's baptism!

Why did the pyramidologist choose the inch as the standard unit of measurement? Pyramidologists believe the linear unit used in the design of the great pyramid is the sacred cubic of 25.0265 British inches. The sacred cubit divided into 25 equal parts results in the sacred inch (also called pyramid inch), which equals 1.00106 British inches. Thus, the pyramid inch is very close to our standard geometric inch.

Over 4,600 years ago, and more than a thousand years before the Bible was written, the Ascending Passage depicted in inches (years), and fractions of an inch, the exact date of the exodus of the Jews and the birth, baptism, and crucifixion of Christ. All that was stored in a stone structure with no written message on it.

Another interesting measurement in the Great Pyramid is what's known as the "Christ angle," which is the angle of the ascending and descending passageways inside the Great Pyramid. It is roughly 26.3 degrees, or more precisely 26 degrees, 18 minutes, and 9 seconds, and it is called such because the angle, if taken north of east from the site of the Great Pyramid, bisects Bethlehem—where Christ was born! But, this is not all. If one were at Bethlehem at the time of Christ’s birth and looked up to the lower belt star of Orion (Al Nitak—the wounded one) at meridian, the angle of that star above the horizon would be at the same angle as the Great Pyramid itself—51 degrees and 51 minutes! 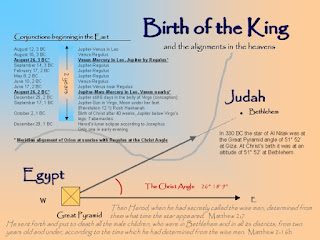 There is much more to be discovered in these Pyramids, many more measurements and hidden chronology dates. See Evidence for God: The Great Pyramid - Part 1!