More than 2,600 years ago, the prophet Ezekiel predicted that in the latter days (before the second coming) a large nation to the north of Israel, along with a number of allies, would invade Israel. This important prophecy is found in Ezekiel chapters 38 and 39.


"Son of man, set thy face against Gog, the land of Magog, the chief prince of Meshech and Tubal, and prophesy against him, And say, Thus saith the Lord GOD; Behold, I am against thee, O Gog, the chief prince of Meshech and Tubal..... And thou shalt come up against my people of Israel, as a cloud to cover the land; it shall be in the latter days, and I will bring thee against my land, that the heathen may know me, when I shall be sanctified in thee, O Gog, before their eyes." (Ezekiel 38:2-6, 16)

The leader of the invasion is identified as "Gog from the land of Magog" (Ezek. 38:2). The land of Magog was located near the Black and Caspian Seas north of the Caucasus Mountains, in the southern part of 20th-century Russia. The leader is also identified as being located in “ the north parts ” (Ezek. 38:15; 39:2). The Hebrew word translated “parts” means “extreme or uttermost parts.” Russia is the nation situated in the extreme or uttermost parts directly north of Israel. Any map would show that Russia is north of Israel. It is clear that Russia will be the leading nation of the invasion. So who are the other nations that will align themselves with Russia? The nations are identified in Ezekiel 38:5–6; "Persia, Ethiopia, and Libya with them; all of them with shield and helmet: Gomer, and all his bands; the house of Togarmah of the north quarters, and all his bands: and many people with thee." The names they bore are from Ezekiel’s time, but the four countries (with their modern-day names) that will align themselves with Russia to invade Israel are: 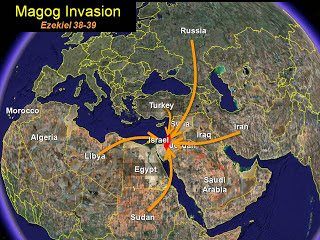 It isn't too surprising to find that all of them are Islamic nations! Today, we see those very nations coming together. Not long ago, there was very little connection between Iran and Russia. Economic and military cooperation between Iran and Russia had never taken place. But around 1989, this started to change. Today, Iran and Russia are strong allies. The Russian-Iranian alliance is propping up the regime of Syrian dictator Assad. There are now 2,000 Iranian and Iranian-backed fighters in Syria. This is backed by Russian air power. Such an alliance has never existed, yet it was predicted in Scripture 3,000 years ago.

Interestingly, the invasion mentioned in Ezekiel involves nations that are at least one country away from Israel’s borders, yet they attack with ground forces from Israel’s north. You'd expect that the attack would have to come from Syria, but Syria is not listed as one of the attackers. We can see why Syria is likely not listed because Syria is powerless, and controlled by Russia and Iran, who are calling all shots today. (See: Iran Is Taking Over Syria. Can Anyone Stop It?)

Syria is being used by Iran and Russia, just as we'd expect if Syria isn't involved in the attack, and current events are confirming this! Recent news shows that Iran is setting up shop in Syria, and has been laying the groundwork for a highway from Tehran to the Mediterranean Sea—in essence building a caliphate with clearly stated plans to destroy Israel! Within the past year alone, airstrikes by Israel against weapons convoys (gifts from Iran to Hezbollah), and an Iranian built missile factory near Syria. Hidden chemical weapons are very likely being stored in and around Syria. ISIS has been contained and the Syrian Civil War brought to a low simmer, Russian and Iranian attention seems to be turning southward toward the mountains of Israel. (See: Wake-Up Call: The Russia-Iran Axis Is an Existential Threat to Israel’s Security.)

Figuring out what would be the exact cause in dragging Russia into the middle-east had been difficult up until now. Today there are many possible ways this could happen. For example, in order to maintain their grip, Russia would instantly be pulled into major conflict if Israel preemptively striked or retaliated against Iran’s growing presence in Syria. It's probable that the next war will be the cause (Ezek.38:4) that draws Russia, Iran and their allies directly into this regional conflict.

It may even be Russia’s need to control the area which could lead to greediness towards Israel’s recent massive oil and gas discoveries. (See: Huge oil discovery on Golan Heights (Globes, the Israeli financial newspaper) or Major Shale Find Could Guarantee Israel’s Oil Supply For Years (NASDAQ)) These and several other forms could serve as the factor that drags Russia into leading the attack.

As for the timing of the Ezekiel 38-39 war, it does seem to happen during the peaceful years Israel will have during the first part of the tribulation (see Ezekiel 38:11). But there are various opinions out there so I wouldn’t be dogmatic about it happening after the rapture. With Russia aligning with Iran it certainly is an exciting time to be a Christian!

When you stop and think about the impossibility of all these current events taking shape exactly as foretold in Scripture, you realize how close we may be to the rapture. All predicted in Scripture 3,000 years ago, what more Christian evidence do you need to know God exists?

UPDATE (18/09/18): Russian officials have blamed Israel for the downing of the IL-20 spy plane. We are now one step closer to the Ezekiel war as Russia raises tensions with Israel! Read more: https://www.israelnationalnews.com/News/News.aspx/252154