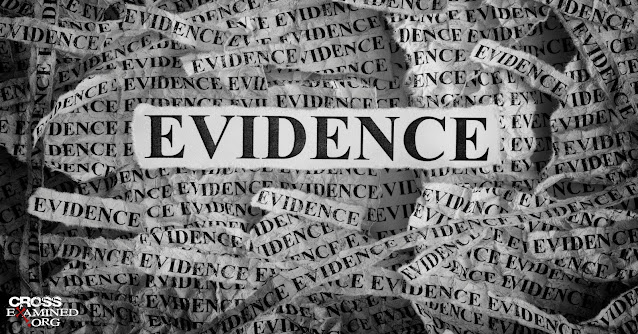 The obvious fine-tuning of the world “proves” the existence of a “Designer.” Science has calculated the odds against our universe randomly taking a form suitable for life as: One in 10,000,000,000124 [Ravi Zacharias, The End of Reason, p. 35]. See more here.

The obvious design (complexity) of the world “proves” the existence of a “Designer.” Science has estimated that the odds that intelligent life exists on the Earth as the result of non-directed processes to be around: One in 102,000,000,000 [Cited in Gary Habermas and Mike Licona, The Case for the Resurrection, 2004, p. 179]. See more here.

In God's creation, there exists a "Golden Ratio" (the mathematical constant of 1.618) that is exhibited in a multitude of shapes, numbers, and patterns whose relationship can only be the result of the omnipotent, good, and all-wise God of Scripture. See here.

Isaiah 19:19-20 tells us that The Great Pyramid "shall be for a sign and for a witness unto the Lord". It was built thousands of years ago, and yet contains extraordinary measurements of Earth and space that could not have been known at the time. It can't even be built with today's modern technology, and hence, people are more willing to believe that Egyptians used superior technology from alien visitors thousands of years ago! See here.

7. Hidden Sevens in the Bible.

The recurrence of the number seven - or an exact multiple of seven - is found throughout the Bible and is widely recognized. But there turns out to be much more below the surface. For instance, in the first 17 chapters of Matthew Gospel, there are 42 such words (7 x 6) and they have 126 letters (7 x 18). Always an exact multiple of 7. These are just two features, there are 14 features, in total, in that chapter! What are the chances? In the 12 verse of Mark Gospel, the chances of this being random chance have been calculated at 54,116,956,037,952,111,668,959,660,849 to 1! It is absolutely, completely, and totally impossible to mathematically disprove this phenomenon. The overall validity of this discovery---the fact that God did it---is unimpeachable! This phenomenon only occurs in the original Biblical Hebrew. See here.

8. 101 Scientific Facts & Foreknowledge in the Bible.

Scientific research continues to unfold the wonders and mysteries of our universe. Interestingly, the Bible has anticipated many of these scientific facts centuries before they were discovered! For example, the Bible shows circumcision on the eighth day is ideal (Genesis 17:12; Leviticus 12:3; Luke 1:59). Medical science has discovered that the blood clotting chemical prothrombin peaks in a newborn on the eighth day. This is therefore the safest day to circumcise a baby. How did Moses know? See more: 101 Scientific Facts & Foreknowledge.

9. Not only was Israel becoming a nation, and the recapture of Jerusalem prophesied, they were also prophesied down to the very date!

There have been thousands of Bible discoveries; but the wonder of it all is that even with all the overwhelming archaeological evidence, none has ever contradicted a single claim the Old and New Testament makes! See here.

11. Specific Bible verses have numbers and themes in the text of the Bible that seem to line up with the locations where the verses are found.

For example, Matthew 24:42 is about the Day of the Lord. It is the 24th chapter, it's about the DAY (24 hours) of the Lord; and the 42nd verse (reverse of 24) is the key verse to watch out for we don't know when this DAY will occur. These three references relating to 24 are all found in the 24,000th verse of the Bible (now that really sets it apart)! Mathematics shows it's statistically impossible for this to be chance occurrence (calculated at billions to one). See over 35 more examples here.

Throughout the Bible, multiple factors and clustering (known as theomatics) is so consistent in words and phrases, that it boggles the mind. The major fact is that it happens so regularly, as to defy any mathematical odds. In other words, if God did not place this phenomenon into the text, then the numerical values for words and phrases would only produce "random" results. It is absolutely, completely, and totally impossible to mathematically disprove theomatics. See here.

13. Overwhelming evidence for a young earth and universe.

For example, there is evidence of recent volcanic activity on Earth’s moon which contradicts the supposed vast age - it should have long since cooled if it were billions of years old! If the sea had no sodium to start with, it would have accumulated its present amount in less than million years at today's input and output rates. This is much less than the evolutionary age of the ocean, three billion years...etc. The list goes on. See: 101 evidences for a young age of the earth and the universe

14. There is a flood of evidence for Noah's flood in the fossil record.

For example, it is not possible for trees to remain vertical for thousands of years while layers form around them, yet we see thousands of them. We also find fossils of sea creatures in rock layers that cover all the continents more than a mile above sea level! The list goes on. See here and here.

Testimonies of supernatural healings, demonic encounters, angelic encounters and many different spiritual experiences by generations of people all over the world speak of a reality/realm that exists beyond the physical. See here.

The New and Old Testament have an overwhelming amount of evidence supporting their reliability. So much so that it defies natural explanation...
See more here.

Approximately 2500 prophecies appear in the pages of the Bible, about 2000 of which already have been fulfilled to the letter - NO errors. The odds for all these prophecies having been fulfilled by chance without error is estimated at over one in 102000! See: 101 Last Days Prophecies

There was never any debate in the ancient world about whether Jesus of Nazareth was a historical figure. The historical evidence for Jesus of Nazareth is both long-established and widespread. Within a few decades of his lifetime, he is mentioned by Jewish and Roman historians, as well as by dozens of Christian writings. See more here.

ELS are words spelled out over a specific interval (instead of reading a text normally––one letter at a time––hidden words are looked for by reading the text every 2, or 3, or 4, (etc.), letters, skipping over the letters in between). For instance, the word "Eden" is encoded repeatedly sixteen times within the relatively short Genesis 2:4-10 passage of only 379 Hebrew letters dealing with the Garden of Eden. The odds against sixteen "Edens" occurring by chance in such a short passage is one chance in ten thousand. In this same chapter, scientists have found twenty-five different Hebrew names of trees encoded within the text of this one chapter! The laws of probability indicate that the odds against this occurring are one hundred thousand to one. See more here.

20. In Revelation chapter 21, there are 12 gems mentioned to be inlaid for decoration of the New Jerusalem, and ALL of these 12 gems are anisotropic gems.

When viewed in crossed-polarised light (similar to “pure” light), anisotropic stones produce a colourful array- reflecting all the colours of the rainbow, whereas isotropic stones lose all of their colour and appear black. Since anisotropic behaviour has only been discovered in the last century (and John wrote Revelation almost 2000 years ago), the odds of 12 stones picked randomly being in that one group, is lower than 1 in 1,000! See here.

The protein inside our body, called Laminin, has an extremely vital role in our bodies. So vital, that without it, we could literally cease to exist. What is it exactly that makes Laminin so special? It is a cell adhesion molecule that is organized into a specific structure and it dictates what job the cell performs in the body. In other words, it literally holds all the cell membranes in your body together. It is the glue of the human body. The cross-like shape of the Laminin molecule is evidence of God's hand in creation! 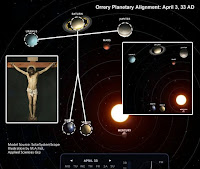 22. Planets aligned to form Jesus on the cross during crucifixion.

On the day commonly viewed as that of Jesus' actual crucifixion, April 3, 33 AD, the planets Saturn, Uranus, Jupiter, Earth and Venus aligned to form what looks like Jesus on the cross with the head, the hands spread out and the legs together in accurate positioning, rotation and on a galactic scale. Indeed, even Saturn's rings can be viewed as representing the 'halo' or 'crown of thorns.' This alignment appears to have occurred only six times between the year 0 and 2000 A.D.

The word "YHWH" is used almost 7,000 times throughout the Bible as the only and unique name of God. Hebrew scholars, when looking at God’s Sacred Name, have concluded that when we breathe, we breathe the very name of God. The very sounds of each letter (YHWH) are the sounds of our breathing! “As long as I have life within me, the breath of God in my nostrils” (Job 27:3).

24. Cross at centre of galaxy.

The Hubble Space Telescope took a picture of the center of the Whirlpool galaxy, M51. The cross-like shape is evidence of God's hand in creation!

On the 1st December 2016, the Islamic State (ISIS) terrorists had been hammering Israel along their border for several days, almost defeating Israel, when, on the fourth day, a large cloud pillar formed within minutes, so thick it made for zero visibility. This strange storm of what appeared to be dust, cloud and rain did NOT cross the border fence into Israel. It sat like a barrier between ISIS and Israel. This is evidence of God protecting Israel as He promised. 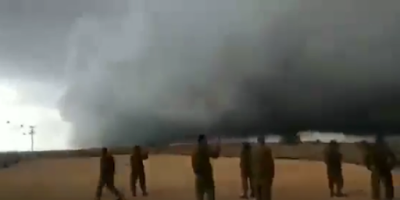