Almost 2,000 years ago, the Bible prophesied that a new world order—a one-world political, economic and religious system—will exist under the rule of the Antichrist in the last days (Dan. 7:23; Rev. 13:7-8). This ruthless dictator is going to exert totalitarian control over the entire world through what we know as the “Mark of the Beast” (Rev. 13:16-17). Until recently, it was difficult to imagine a coming time when so many will readily accept this Mark. After all, even people who have never touched a Bible are generally uneasy with the number 666 because of the press it receives! However, this is no longer the case...
Since late last year, political theatrics, media propaganda, and hysterical levels of fear have motivated millions all over the world to willingly become compliant to an unproven, experimental vaccine—despite thousands of people, eminent doctors, and leading virologists having reasonable concerns about its safety and possible side effects. As for the non-compliant, the government aren’t forcing them to take it. But, soon, retailers will. Airlines will. Banks will. No one will be able to buy, sell, or trade without the vaccine. Of course, the vaccine isn’t the Mark of the Beast, but it sure is conditioning the masses for when it does come along.
In my last article on coronavirus and the coming new world order, I mentioned a slew of agenda items on the globalist checklist that were starting to be pushed out in line with Bible prophecy, including increased surveillance and control of world population (Rev. 13:11-18); and increased censorship and control of information on the internet (2 Thes. 2:10-11; 2 Tim. 3:13). Since I wrote that article, the rollout of vaccines worldwide has taken these to a whole new level...

Even those unaware of Bible prophecy are noticing the unprecedented censorship and suppression that is taking place. According to a group of 26 UK journalists, COVID news is being “censored” to create “one official narrative”. They told Press Gazette:

“There’s only been one official narrative played out in the mainstream media and that has not changed over time...There’s only been one ‘scientific truth’ allowed to be discussed: the one endorsed by worldwide governmental regulatory bodies, even that has been very selective. This has given the public a distorted view of the truth which has been highly damaging.”

From suppression of the Hunter Biden scandal to control of what was said about COVID-19, the global elite are now deciding what people can or cannot read about the new COVID vaccines. Thousands of doctors and scientists, like former chief scientist at Pfizer, Dr. Michael Yeadon, and inventor of mRNA vaccine technology, Dr. Robert Malone, are risking losing their jobs and having their reputations smeared to speak out about the vaccines’ health risks, including permanent damage and death. 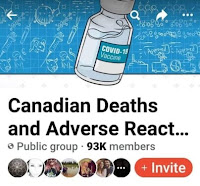 A group on Facebook called “Canadian Deaths and Adverse Reaction”, which had almost a hundred thousand members and hundreds of posts by people sharing serious side effects that they, or people they knew, were experiencing from the vaccines, was recently taken down by Facebook for “containing conspiracy theories”!
The U.S. Vaccine Adverse Event Reporting System (VAERS) has reported skyrocketing vaccine-related deaths following the vaccine rollout compared to previous years (see graph below). Although some of these deaths are questionable, since reported events are not always followed up on, such a dramatic increase confirms many of the anecdotal experiences that people are reporting and suggests the risk of adverse reactions from these COVID vaccines is far greater than what we’re being told. What’s worse, studies have found that only around 0.8 to 2 percent of adverse events are actually reported to VAERS. See: Underreporting of Serious Injuries to Vaers Confirmed by New Study

Meanwhile, alternative treatments such as Hydroxychloroquine and Ivermectin are being banned and its advocates systematically censored and demonized on social media, despite hundreds of peer-reviewed scientific studies showing their efficacy. Ivermectin literally beat COVID-19 in India, yet there was no mention of that in the news! See: India’s Ivermectin Blackout

While some are grappling with serious vaccine injuries, such as Guillain-Barré syndrome, Bell’s palsy, seizures, myocarditis, blood clotting, autoimmune disease, and death, the COVID vaccines are continuing to be shoved down our throats—even to children as young as 5, who have no risk of serious illness from COVID, and people who have already had the virus and acquired natural immunity!
Researchers have determined that mRNA vaccines cause myocarditis, or heart muscle inflammation (which can lead to heart failure and death), in some adolescents with rates ranging from 1 in 1,000 (Nova Scotia data), 1 in 3,000-6,000 (Israel), 1 in 10,000 (Quebec), and 1 in 22,000 (CDC). But the rate of adolescent hospitalizations from COVID, in comparison, is only 1 in 50,000, according to the CDC!
Worse yet, the latest data suggest that the vaccines are not working as well as expected. Though, this hasn’t stopped the media from cherry-picking data to support their claim that all deaths are now among the unvaccinated; a claim which is grossly misleading because it’s based on CDC hospitalization and mortality data from January through June (a time period when most of the U.S. population was unvaccinated and the new “Delta” variant wasn’t prevalent). Consider the following contradictory data:
As a result of these disturbing news, the Centers for Disease Control and Prevention (CDC) is now saying the fully vaccinated will need to wear face masks again (see: CDC reverses indoor mask policy), and Israel has banned the entry of vaccinated tourists (see: COVID: Entrance of vaccinated to Israel postponed again amid outbreak)! So much for a return to “normalcy”.
Furthermore, upon overlaying graphs showing a country’s COVID mortality trends with the increasing number of vaccine doses in that country, we see no reduction in COVID deaths for the majority of countries, and in fact the opposite is true (see: Impact of COVID Vaccinations on Mortality). Likewise, while COVID cases are surging in many of the most vaccinated places in Europe, the 15 least vaccinated countries don‘t seem to face any problem:
Recently, Dr. Anthony Fauci said that vaccinated people infected with the Delta variant have the same viral load as the unvaccinated and can easily spread Delta. So, if the vaccine merely reduces the severity of COVID symptoms, but does not reduce transmission and create herd immunity (see: Five reasons why COVID herd immunity is probably impossible), then why are the medical industry, governments and corporate media so aggressively pushing for mass vaccination? And why are people being made to feel guilty or forced into being vaccinated if their vaccination status has no effect on other people? Probably because it’s not about the virus or protecting peoples’ immune system. It’s all about control.

Now, companies everywhere are rushing to develop proof-of-vaccination technologies, with airlines, cruise ships, stadiums and other businesses considering—or already using—vaccine passports to exclude the unvaccinated. See: Vaccine passports
In fact, the Bill and Melinda Gates Foundation are funding the development of a Quantum Dot Tattoo I.D. technology—a ‘dissolvable ink’ that can be embedded in the skin with the vaccine, creating a barcode ‘tattoo’ only visible when using a smartphone application (see: Invisible Ink Could Reveal whether Kids Have Been Vaccinated). This is especially interesting considering that the Mark of the Beast is described as being in the hand, yet at the same time it is “a scratch or etching (stamp)” (Rev. 13:16; 14:9; 20:4).

Do you remember when we were told that masks don’t work, and then that they do work? That protests during lockdowns are a “health intervention”? That there are countless genders? That COVID didn’t come from a lab, and then that it did? That the Hunter Biden story is Russian disinformation, and then that it’s not...?
It’s a wonder that anyone has faith in these so-called “experts”! I’d much rather put my faith in God’s unchanging Word, which warns that a great deception is coming (Mat. 24:24; 2 Thes. 2:10-11; 2 Tim. 3:13). I believe it’s already gaining momentum.

For those who have not accepted Jesus Christ as Lord and Savior: now is the time to do so—so that you can escape the coming Antichrist’s reign of terror before it’s too late. For those who do know the Lord: it’s time to lift up your head—your redemption is at hand.
Read the first part of this article here!