Where are the transitional fossils for evolution?

Why are the (expected) countless millions of transitional fossils missing?
Darwin noted the problem and it still remains. The evolutionary family trees in textbooks are based on imagination, not fossil evidence. 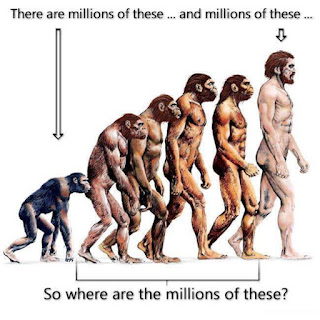 If one basic type of animal evolved into another basic type, it must have passed through "in between" stages, or transitional forms. Whether or not these transitions were ever preserved as fossils, they must have existed. In fact, they must have existed by the trillions. Consider an evolutionary favorite—the evolution of a four-legged land animal (variously described as cow-like or wolf-like), into a whale. Surely this incredible transition couldn't take place in just a few steps—legs into flippers, fur into oily skin, etc. Where are the transitional forms?

Evolutionists sometimes brag that they have abundant evidence of transitions, but when pressed, the examples are almost always minor variations within a category, as expected within creation thinking, and thus certainly not proof of evolution.

What we see instead, of course, is an array of distinct "kinds" of plants and animals with many varieties within each kind, but with very clear and -- apparently -- unbridgeable gaps between the kinds. That is, for example, there are many varieties of dogs and many varieties of cats, but no "dats" or "cogs." Such variation is often called microevolution, and these minor horizontal (or downward) changes occur fairly often, but such changes are not true "vertical" evolution.

In the entire fossil record, there is not a single unequivocal transition form proving a causal relationship between any two species. From the billions of fossils we have discovered, there should be thousands of clear examples if they existed.

In other words: Evolution—a theory of change without any evidence of change.

Do you have that much blind faith? How is evolution not considered a religion?

The Bible states in Genesis I that all creatures reproduce “after their kind” (no change to another kind, i.e., no transitional forms). So the complete absence of transitional forms in the fossil record supports creationism. Is this scientific evidence for creationism, or isn’t it?