Top 20 Questions to Ask an Evolutionist...

Check out these 20 questions to which evolutionists have no satisfactory answer for. These should prove to you that there is more “faith” required to believe in blind evolution than in an all-knowing Creator. 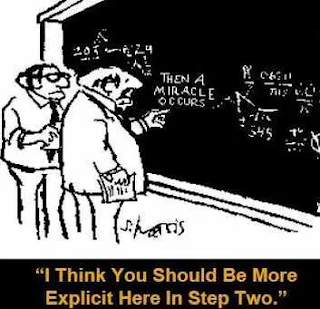 1. Since information is non-material and in all observed cases always requires an intelligent sender, how did all the information contained in DNA originate?

2. How did life originate? How did something come from nothing?

3. Why are the (expected) countless millions of transitional fossils missing? Darwin noted the problem and it still remains. The evolutionary family trees in textbooks are based on imagination, not fossil evidence.

5. How did blind chemistry create mind/ intelligence, meaning, altruism and morality? If everything evolved, and we invented God, as per evolutionary teaching, what purpose or meaning is there to human life? Should students be learning nihilism(life is meaningless) in science classes?

6. Can you name one piece of technology that could only have been developed starting with a belief in molecules-to-man evolution?

7. Why is it that multiple radiometric dating methods yield widely different results on any one igneous rock sample? Why do evolutionists pretend to know the ages of fossils, when in fact there is no radiometric method of dating them?

8. How do ‘living fossils’ remain unchanged over supposed hundreds of millions of years, if evolution has changed worms into humans in the same time frame?

9. How did we get such nicely rounded spheres from a Big Bang that should have given jagged rocks? How did all the planets come into orbit after such an explosion?

10. If we are evolving why don’t we have third arms now? First of all, the lack of a case for evolution is clear from the fact that no one has ever seen it happen. If it were a real process, evolution should still be occurring.
11. How do we know what “evil” is? How do we know what “good” is? How are each of us are born with an innate sense of morality, each fundamentally knowing what is right and wrong? These concepts demand either the existence of a standard to make such evaluations, or an understanding what these concepts mean. It is incredible to consider that no matter time, culture, geographic location, or people, the Moral Law has been universally acknowledged. This tends to confirm that all of creation bears the finger-prints of a Creator who is fundamentally good and right.

12. How did Time, Space and Matter come into existence? (E.g. Did they evolve too? Do planets evolve? Do rocks evolve?)

13. Why are there male and female? Who came first —a him or a her? Which evolved first, male sex organs or female sex organs? Male sex organs are so different from female sex organs that neither could possibly have evolved from the other. Neither could either have evolved without the other! Think that through!
14. If man evolved from apes, why do apes still exist?
15. Which came first, the chicken or the egg? It’s a real dilemma for an evolutionist to answer. An egg comes from a chicken, yet the chicken comes from an egg. How can there be one without the other?
A more interesting question arises: 16. Which came first—the commitment to naturalistic evolution and the necessity that animals arose from different animals, or the data to support it?
When one living thing needs another different living thing to survive, it’s called a symbiotic relationship. A good example of this is the relationship between bees and flowers. The bees need the nectar from some types of flowers to feed while these flowers need bees to pollinate them. Both depend on each other to exist and survive. The question for evolutionists is: 17. How did these plants exist without the bees, and how did the bees exist without these plants?

18. Why is it that the vast majority of us die between the ages of 40 and 80, no matter where we live or what we eat? If evolution were true, why don’t we see some people who live in relatively unpolluted areas living to be 200 to 300 years old?

19. If humans were around millions of years ago, why is the population so small?

20. How do we account for the origin of 116 distinct language families?

Just because an alternative explanation is possible, it does not make it probable. Anyone can give a different explanation, but we want one that actually fits the facts, and fits most likely.

Again, you need more “faith” to believe in blind evolution than in an all-knowing Creator.