Although many things about a rock can be measured, its age cannot be directly measured. Radiometric dating techniques relies upon assumptions. To help you understand the reality of radiometric dating, think of it like this:


If you were asked to find out when a candle, that was burning on a table, was lit, and you weren't there, all you can find out is either the height of the candle, or you can measure how fast it is currently burning by measuring the candle for awhile.

So all we have is the height of the candle, and the rate at which it is currently burning. You still cannot figure out when it was lit, unless you make some assumptions.

Neither of those can be known. If you find a fossil in the dirt, the amount of carbon can be measured, and the rate of decay can be determined. We don't argue with either of those.

But we must make some assumptions.

1. These assumptions do not take into account the impact of weathering by surface and ground waters and the diffusion of gases. It is impossible to know to what degree products have been added to or removed from the rocks over the alleged millions or billions of years.

Therefore, using an assumed constant ratio for dating inevitably results in inaccurate radiocarbon readings. And there is no way to prove that the decay rate was not different at some point in the past. These two problems alone, in reality, clearly calls into question the validity of virtually any dates assigned to fossils.

Carbon-14 actually decays so quickly—with a half-life of only 5,730 years—that none is expected to remain in fossils after only a few hundred thousand years.


Carbon-14 shouldn't even be used to date anything over a few thousand years, since its half-life is only 5,730 years! And Carbon-14 has been detected in “ancient” fossils—supposedly up to hundreds of millions of years old—ever since the earliest days of radiocarbon dating. It's found in everything! If radiocarbon lasts only a few hundred thousand years, why is it found in all the earth’s diamonds dated at billions of years old?

This range is lowered even more by the calculations of other reputable secular scientists, including Robert L. Whitelaw (1968), who believed that C-14 could date no farther back than 5000 years. Dr. Walt Brown (2008), has presented recent data showing that C-14 dating becomes unreliable after about 3,500 years. The bottom line is that C-14 dating is clearly useless for dating so-called prehistoric life forms.

Despite these, there are many other cases that illustrate just how inaccurate and unreliable radiocarbon dating can be. The following striking examples are just the tip of the iceberg:


If radiometric dating fails to get an accurate date on something of which we do know the true age, then how can it be trusted to give us the correct age for rocks that had no human observers to record when they formed?

To be considered credible, radiometric dating would have to be scientifically sound and consistently accurate. As we have just seen, however, it is riddled with scientific flaws and endless examples of inaccurate measurements. Therefore, it is no more valid than the geologic column for determining when dinosaurs lived.

In 1970, at the Nobel Symposium an evolutionist said:

“If a C14 date supports our theories, we put it in the main text. If it does not entirely contradict them, we put it in a footnote. And if it is completely ‘out of date’, we just drop it.”

Science is controlled by evolutionists who are not really interested in the truth, and will deny any evidence to the contrary. 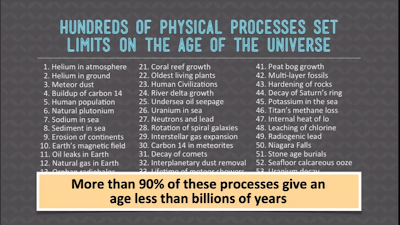