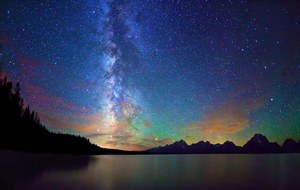 Testimonies of supernatural healings, demonic encounters, angelic encounters and many different spiritual experiences by generations of people all over the world speak of a reality/realm that exists beyond the physical. Especially when it comes to ghosts, hauntings, séances, tarot cards, Ouija boards, crystal balls...etc.

We are continuously fed with information about the spirit world from newspapers, TV, radio and movies. Try searching on google for the "Top 10 Grossing Pictures or Fictional Books", and it is almost guaranteed that a number of them will deal with the topic of the spirit world. “Channelers” are people who claim to communicate with the dead, and are now featuring in TV programs that are becoming increasingly more popular.

You may have seen TV shows similar to "Ghost Hunters," where paranormal investigators scientifically investigate ghosts. They find some startling results from their investigations, such as voices recorded on tape recorders which were not originally heard by anyone, objects being moved, even the occasional "apparition," either a shadow, a strange figure, etc.

You may have heard that ghosts acting like people of the past are really just demons who are pretending to be in order to trick humans. People have tried to (or claimed to) communicate with spirits for ages.

When humans are possessed by evil spirits, their character changes and they seem to no longer be themselves. This phenomenon can be observed with our own eyes, so there's no doubt it is real.

We can also look at the vast number of religions around the world and the billions of people who focus their lives on the spiritual realm. Is it likely that so many people would report encounters with the spiritual and it not be real?

These things are intriguing for many people simply because they seem to give people further understanding of parts of our world that lie beyond our physical limits. Even more, such things seem innocent and harmless. Most non-believers who engage in these acts believe that ghosts are the spirits of dead people who have not gone on to the “next stage”. Ghosts are real, but they are not angels from God or our dead loved ones. They are fallen angels trying to deceive us. It’s in the Bible!

What does the Bible say?

Scripture confirms that the things mentioned above exist, and are very real. It also proves that science can’t explain everything. The definition of the word spirit is “a supernatural being or essence.” The scientific community reject anything that is supernatural. Anything that can’t be observed under a microscope or through a telescope or that can’t be examined in a laboratory is brushed aside. Science admits it deals best with the physical world, and are skeptical towards anything beyond the physical world, such as the spiritual realm.

Ghosts, hauntings, séances, tarot cards, Ouija boards, crystal balls etc. all raise distinct problems to non-believers who engage in these acts. Why? Because the worldview of non-believers is either the spiritist worldview - that holds that the spirit world does exist, or the materialist worldview - which claims the spirit world does not exist. The problem is that the spiritist presupposes the existence of God but, in practice, denies his reality, and, on the other hand, the materialistic worldview cannot make sense of any of the behaviour mentioned above. To deny the existence of demons is not skepticism; it only displays ignorance.

The spiritual realm is real, and so is God...

Remember that God commands us to have nothing to do with the occult, devil worship, or the unclean spirit world (Deuteronomy 18:9-12; Isaiah 8:19-20; Galatians 5:20; Revelation 21:8). Believers in Jesus Christ should not be involved in the occult. The spirit world is real, but Christians do not need to fear it (1 John 4:4).