Esther: The Hidden Hand of God

Out of all the books of the Bible we find that the book of Esther doesn’t speak of God, or does it? 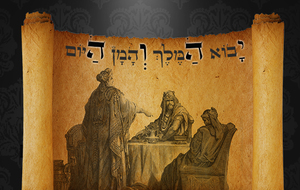 The Book of Esther is rather odd because it is the only book of the Bible in which the name of God appears to be missing (Martin Luther considered excluding it from the Bible for this reason1). Nonetheless, in this short book consisting of just 167 verses, the Median King is mentioned 192 times, his kingdom is referred to 26 times, and his name "Ahasuerus" is given 29 times. So why isn't God explicitly mentioned?


"Then My anger shall be aroused against them in that day, and I will forsake them, and I will hide My face from them, and they shall be devoured. And many evils and troubles shall befall them, so that they will say in that day, ‘Have not these evils come upon us because our God is not among us?’ And I will surely hide My face in that day because of all the evil which they have done, in that they have turned to other gods." (Deuteronomy 31:17-18)

God declared that if His People forsook Him, He would hide His face from them. The Book of Esther is a clear example of God fulfilling His Word. God was hiding His face from His people on account of their sins; they had deliberately chosen to continue in the land of their captivity among the heathen, instead of availing themselves of the opportunity of returning to Jerusalem with Zerubbabel. But, though He was hidden from them, He was working for them. The name Esther gives us another clue: it means "Something Hidden"!

An "Acrostic" is when the initial letter of each line spells out a word, and it can be used as a mechanism for including a hidden message. The name of God is hidden several times in acrostics in the Book of Esther! Four times it appears as an acrostic, the famed Tetragammaton, "YHWH" or "Yahweh" or "YeHoVaH", and once as "EHYH" or "I AM". (Note: This phenomenon is only found within the original Hebrew Bible.)


"And when the king’s decree which he shall make shall be published throughout all his empire, (for it is great,) all the wives shall give to their husbands honour, both to great and small." (Esther 1:20)

The name YHWH reads backward with the initial letter (Note: Hebrew reads from right to left).


"And Esther answered, If it seem good unto the king, let the king and Haman come this day unto the banquet that I have prepared for him." (Esther 5:4)

The name YHWH reads forward with the initial letter.


"Yet all this availeth me nothing, so long as I see Mordecai the Jew sitting at the king’s gate." (Esther 5:13)

The name YHWH reads backward with the final letter.


"And the king arising from the banquet of wine in his wrath went into the palace garden: and Haman stood up to make request for his life to Esther the queen; for he saw that there was evil determined against him by the king." (Esther 7:7)

The name YHWH reads forward with the final letter.

The above are four of them, and the final one validates the others. It is "I AM" or EHYH in Esther 7:5, meaning 'I shall prove to be'.

The following phenomena are noticed in examining the four Acrostics which form the name "YHWH":

In these five Acrostics we have something far beyond a mere coincidence; we have design!

But that's not all...
The names: Meshiach ("Messiah"), Yeshua ("Jesus"), and El Shaddai ("The Almighty"), also appear as equidistant letter sequences! (ELS are similar to acrostics, but instead of reading the initial letter, hidden words are looked for by reading the text every 2, or 3, or 4, (etc.), letters, skipping over the letters in between.)

1. In Esther 1:3, counting in 8 letter increments, we find the letters spelling "Meshiach", the Hebrew name of the Messiah. The interval of eight is significant as the number of Jesus is 888 (in gematria).

2. Again, in Esther 9:17, counting in 8 letter increments, we find the letters spelling "Yeshua", the Hebrew name of Jesus.

3. Finally, in Esther 4:2, counting in 7 letter increments, we find the letters spelling "El Shaddai". El is the familiar name of God; Shaddai, from the root for "breast" or "provider"; the Almighty. And the use of seven shouldn't surprise us.

The Book of Esther is designed to show God's providential care of His people. Even in the explicit absence of God’s name, the Book of Esther reminds us that He is always present and always in control. See related article: ELS in the Bible

1 Colloquia Mensalia, or The Table Talk of Martin Luther , trans. by William Hazlitt, World Publishing Co., 1952. "I am so great an enemy to the second book of the Maccabees, and to Esther, that I wish they had not come to us at all, for they have too many heathen unnaturalities. The Jews much more esteemed the book of Esther than any of the prophets; though they were forbidden to read it before they had attained the age of thirty, by reason of the mystic matters it contains." (Ed. Note: He was in error; that was Song of Songs - CM.)↩