10 Evidences for a Young Earth Dinosaurs are often used as the ‘poster-child’ for evolution and an old earth, with evolutionists claiming that dinosaurs died out 65 million years ago, long before any humans existed. Yet, legends of dragons are found in virtually every country’s mythology. Dinosaurs are depicted in countless ancient cave drawings, tapestries, and carvings—like this 500- to 1,500-year-old rock carving in Utah that resembles a sauropod dinosaur:
And this bas relief carved by ancient Asians nearly 800 years before scientists discovered Stegosaurus fossils:
Dinosaur fossils have even been found with extremely well-preserved soft tissues still containing blood cells, proteins, and DNA—defying millions of years of preservation.

Evidence 2: Carbon-14 in Everything

One of the methods used by evolutionists to date fossils younger than 50,000 years is radiocarbon dating, since the half-life of Carbon-14 is only 5,730 years. Yet, Carbon-14 has been found in everything—including all the earth’s diamonds that are supposedly 1-3 billion years old! See: Radiocarbon in Diamonds Confirmed

Evidence 3: Missing Salt in the Ocean 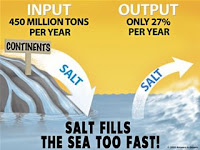 According to evolutionists, the oceans are about 3.8 billion years old. Yet, based on the current rate at which salt enters and leaves the ocean, today’s ocean saltiness would be reached in only 42 million years (1/70 of the supposed age).[8] This is much more consistent with the Biblical timescale of about 6,000 years when the global Flood is taken into account, and the likelihood that oceans were already salty at the time of creation.

Evidence 4: Recession of the Moon

According to scientists, a supernova, or massive star explosion, occurs approximately once every 25 years within our galaxy, leaving behind fragments that are visible for over a million years. Our galaxy is supposedly 13.51 billion years old. Yet, only about 200 supernova fragments can be observed in our galaxy, which is consistent with about 7,000 years’ worth of supernovas.[6]

According to scientists, the highest number of mitochondrial DNA mutations recorded in the human race is around 100. Yet, based on the current rate of 0.5 mutations per generation, it would take only 200 generations, less than 6,000 years, to accumulate this number.[9] In a 1997 research paper, Evolutionists admitted, “Using our empirical rate to calibrate the mtDNA molecular clock would result in an age of the mtDNA MRCA [most recent common ancestor or the first human woman] of only ~6,500 years.”[4] Of course, it received little attention in the evolutionary community.

According to scientists, the earth’s magnetic field, which protects us from solar radiation, has been rapidly decaying at a rate of 5% per century.[3] Yet, based on the current rate, the field and thus the earth could be no older than 20,000 years, since Earth would have been unable to support life due to heat from the electric current by then.[7]

Evidence 8: Origin of Civilization and Agriculture

According to evolutionists, the first humans were born in Africa around 200,000 years ago. Yet, ancient man only began making written records, beautiful cave paintings, and even building megalithic monuments about 4,000 to 5,000 years ago. Agriculture is also said to have begun only 10,000 years ago. Why would they wait two thousand centuries before using the same skills to record history? And why did none of them discover that plants grow from seeds? 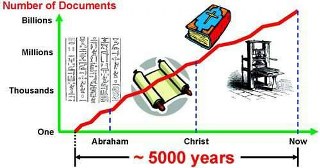 According to evolutionists, the world population was roughly between one and ten million at the time agriculture began, which means at least eight billion bodies and their artifacts would have been buried since the supposed first Homo sapien. Yet, only a few thousand stone age skeletons and artifacts have been found…

According to evolutionists, the oldest tree on Earth is the Great Basin bristlecone pine in California, and since it is a living tree, it has been fairly accurately dated via tree rings to be approximately 4,300 years old.[2] This is perfectly consistent with the Biblical account but a dilemma for those who believe in millions of years. Why are there no older trees?

The theory of evolution which relies upon an old earth and universe forces scientists to try to "debunk" what would otherwise be a plain testimony: that the earth is only a few thousand years old. Although the Bible does not give an exact age of the earth, there is no indication in Scripture that the earth is very old. In fact, a simple addition of the genealogies in Genesis suggests that the earth is around 6,000-10,000 years old. It is yet another confirmation of the infallibility of God’s Word. See 101 more scientific evidences at Creation Ministries: https://creation.com/age-of-the-earth