Evidence that Dinosaurs Existed with Humans

Evolutionists claim that dinosaurs died out 65 million years ago. Here are four plainly obvious discoveries that clearly prove dinosaurs existed with humans, and died out only thousands of years ago! 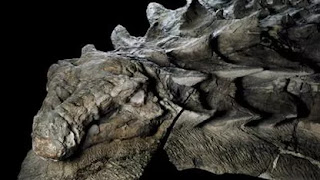 1. This perfectly preserved Nodosaur, in the picture to the left, was discovered several years ago in Alberta, which is just now making national news. To be frank, there are simply no uniformitarian processes that can account for this perfect preservation. The animal was trapped in sediment very quickly during the worldwide flood of Noah's day.

2. These ancient depictions of dinosaurs/and humans with them, below, make it difficult in seeing how artists from ancient times could have produced such good representations of the great reptiles of history unless they had either seen them themselves or had accurate accounts passed down to them from eye witnesses. It took modern paleontologists many decades to begin to faithfully reconstruct these magnificent animals. These historical depictions of ‘dragons’ and ‘monsters’ confirm the Bible’s testimony that dinosaurs and people lived side by side in recent times, and confute the evolutionary claim that dinosaurs died out 65 million years ago. 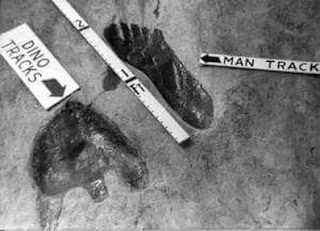 3. These are dinosaur foot prints found together with humans. Several claims have been made about them being frauds. But several other human prints were found with dinosaur prints. One evolutionist went as far as to say: They must have been made by a dinosaur that had human feet.
History shows these are not fake, and creationists have met every challenge to prove they are not fake. The evidence is still rejected. This is because through evolution science is about naturalism and conformism. All evidence that supports the supernatural will “always” be rejected. It’s either their way or no way.

4. If dinosaurs lived over 65 million years ago, why do some dinosaur fossils still contain well-preserved soft tissues? We find blood vessels, cells with nuclei, tissue elasticity, and intact protein fragments in a dinosaur bone, supposedly dated at 68 million years old! The fact that dinosaur femur soft tissues have been described as “still squishy” and contain recognizable blood cells also confirms the recency of dinosaur fossil deposition. 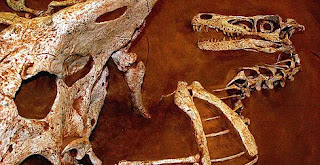 The book of Job refers to a creature called behemoth. With a massive size and a tail like a cedar tree, its description matches that of a sauropod dinosaur. God calls it to Job’s attention with the words,

Thus, this statement affirms that both behemoth and man were made on the same day.

Evolutionists, however, have difficulty explaining away dragon legends, cave drawings, and even modern "sightings." Furthermore, they can't explain either their demise or their evolution. The "just-so" stories they tell are inferior to a reconstruction of the past based on the Bible.