Many believe that since God created the world in six days and rested on the seventh day (Genesis 2:1-3), that God has a 6,000-year plan for man followed by a 1,000-year reign by Jesus Christ (Revelation 20:4). In Biblical times, it was commonly believed among the Jews, and early Christians, that at the end of 6,000 years of history, Christ would return and reign for 1,000 years. Early Christian writers, such as Barnabas, who was with Paul the Apostle in Lycaonia, wrote:


“Therefore, children, in six days, that is in six thousand years, everything shall come to an end.”

'As there had been 2,000 years from Adam to Abraham, and 2,000 from Abraham to Christ; so there will be 2,000 years for the Christian era and then would come the Millennium.'"


There is even an old tradition that the prophet Elijah taught there would be six thousand years for humans to rule under Satan's kingdom, followed by one thousand years of abundance in the kingdom of God.

Let’s look at some interesting things in Scripture that support this belief...

1. There are two places in Scripture that say a day with the Lord is as a thousand years:


"For a thousand years in Your sight Are like yesterday when it is past." (Psalm 90:4)

2. Scripture also says that there still remains a day of rest for God's people. Paul tells us that “the whole creation groaneth and travaileth in pain together until now” (Rom. 8:22), which means that the creation has not yet entered into the rest that the Scriptures mandate (Isa. 11:10; 14:7; 44:21-23; 49:13; 55:12). This rest will occur under the rule of Jesus when He returns and sets up the promised kingdom on earth for one thousand years (Rev. 20:1-7)! 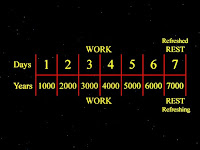 Interestingly, in Hebrews 4:4, 11, the seventh day of the week is pictured as a type of the peaceful "rest" on earth which will follow Christ's return! Being a time of “rest” (Heb. 4:4-11), and lasting a thousand years (Rev. 20:1-7), it makes perfect sense that God would correspond it to the seventh day rest of Genesis 2:2. Since the last "day" of God's plan for mankind is 1,000 years, it is logical to conclude that the other six days of creation typify 6,000 years of man's government on earth.

Furthermore, the number 6 represents mankind and rebellion (6,000 years of man's self rule?). The number 7 represents perfection (The Millennium?). The number 8 represents new beginnings (New Heavens and New Earth?). Could it be that God is trying to show us something here?

The list goes on. There are many other instances in the Bible that reflect a similar kind of timeline, and there is no need for such specific information (the six and a distinct seventh pattern) unless it hints at a larger truth!

4. Bible chronology shows there were approximately 2,000 years from Adam's creation until Abraham (Genesis 5; 11) and 2,000 years from Abraham until Jesus Christ. Is this merely coincidence? Given that the Millennium, the final "day" in God's plan for human history, will be 1,000 years, it requires no great leap of exegetical skill to posit a comparable 2,000 years from Jesus' First Coming to His Second Coming.

The notion that there will be 2 days, or 2,000 years, from Christ’s death till the Second Coming, or 4,000 years from Adam to Christ’s death, also seems to be confirmed by Bible analogies:


Lastly, Hosea pictures Christ's Second Coming 2,000 years after his ascension, in one of the most remarkable passages that supports the theory of God having a 7,000-year plan:

“I will go and return to my place, till they acknowledge their offence, and seek my face: in their affliction they will seek me early. Come, and let us return unto the LORD: for he hath torn, and he will heal us; he hath smitten, and he will bind us up. After two days will he revive us: in the third day he will raise us up, and we shall live in his sight.” (Hosea 5:15-6:2)

No one seems to be able to explain this verse. But if you apply this verse inside the 7,000-year template: “I will go and return to my place, till they acknowledge their offence . . .”  refers to Jesus returning to heaven after being rejected and crucified by the Jews. He will remain there until they “acknowledge their offense” and “seek” him in the Great Tribulation, which the passage calls “their affliction.” They will then “return unto the LORD” and be revived “after two days,” which equals the third 2,000-year time slot in God’s Plan, toward the end of which Israel becomes a nation (1948) in preparation for a spiritual revival later. Finally, “in the third day he will raise us up, and we shall live in his sight” refers to the nation being totally revived and regenerated at the Second Coming of Christ and living in His sight in the millennial kingdom, which is the “third day” after Calvary, the “third day” after their offense of rejecting Christ.


"But of the tree of the knowledge of good and evil, thou shalt not eat of it: for in the day that thou eatest thereof thou shalt surely die" (Gen. 2:17).

5. Scripture statements seem to support that we have been in the LAST DAYS ever since Jesus died:

"In the last days, God says, I will pour out my Spirit on all people. Your sons and daughters will prophesy, your young men will see visions, your old men will dream dreams." (Acts 2:17)

"In the past God spoke to our ancestors through the prophets at many times and in various ways, but in these last days he has spoken to us by his Son, whom he appointed heir of all things, and through whom also he made the universe." (Hebrews 1:1-2)

These verses are likely referring to the latter days of the 7,000 year week. If there is no 7,000-year plan, then the New Testament statements above about then being in the last days make little sense.

6. Everyone is aware of the weekly Sabbath, the seventh day of the week under the law of Moses, but most do not realize that God has more than one Sabbath. In the Bible, there is a "Week of Days", "Week of Weeks", "Week of Months" and a "Week of Years" (see a more in-depth discussion here)! If there are "weeks" (groups of seven) of days, weeks, months, and years, what about millennia?


There are many other Scriptures showing support for a 7,000-year plan, and the lateness of the hour makes this truth more relevant today than at any time in human history.

Have you ever wondered why the Bible records the ages of people all the way back to Adam? Or why it records the number of years the Kings of Israel ruled? It seems God wanted us to be able to count the years from creation. Interestingly, after stating a thousand years is as a day in Psalm 90:4, the Psalmist writes that our own days are limited and we should number our days that we may have the heart of wisdom (Psalms 90:4-12)! Could understanding approximately where we are in the 6,000 years be a wise thing to do?

Historical records indicate that almost 6,000 years have elapsed since the re-creation of the earth and almost 2,000 years since the death of Jesus Christ. Based upon certain calculations that I am currently aware of, it seems that Adam and Eve were created and/or apparently left the garden of Eden between roughly 3959-3975 B.C. (it is most likely that the 6,000 years began once Adam sinned as Adam had not rebelled before then). This would suggest that the 6,000 years should be up sometime between 2026 A.D. - 2042 A.D.

However, a more accurate way to calculate when the 6,000-year period ends would be to add 2,000 years from the year Jesus Christ was crucified - and the Church Age began - which likely marks the beginning of the third 2,000-year time slot in God’s Plan. Although we cannot state with absolute certainty the amount of time that passed since Adam, we can establish the date of the crucifixion with fair certainty: Virtually all scholars believe, for various reasons, that Jesus was crucified in the spring of either 30 A.D. or 33 A.D. Based upon this calculation, we COULD expect the 6,000 years to end, and Jesus Christ to return, in 2030 A.D. or 2033 A.D. (Please note: I am NOT setting a specific date for Jesus to return, but only suggesting a "possibility" based on whether the 7,000 year plan is correct).

Considering almost 2,000 years have passed since Christ's crucifixion (making a total of nearly 6,000 years—or six millennial days—from Adam), and at this precise juncture in human history mankind stands poised with the ability to blow up and blast out of existence all life on planet Earth, the 7,000-year plan is more believable than ever!
In any case, with Israel being a nation in the land again, and many other prophetic implications ramping up as of late, we know that Jesus will return very soon. The time is short.