Modern-day Israel is indeed a fulfillment of prophecy. The rebirth of Israel as a nation, and the capture of Jerusalem in 1967 were two amazing fulfillments of prophecy. But there are many more prophecies regarding Israel that have been fulfilled! Here's a few of them.

"I will make rivers flow on barren heights, and springs within the valleys. I will turn the desert into pools of water, and the parched ground into springs. I will put in the desert the cedar and the acacia, the myrtle and the olive. I will set junipers in the wasteland, the fir and the cypress together, so that people may see and know, may consider and understand, that the hand of the Lord has done this, that the Holy One of Israel has created it." (Isaiah 41:18-20)

Since its foundation in 1901, over 250 million trees in Israel have been planted! An organization has also built 250 dams and reservoirs, developed 250,000 acres of land and established thousands of parks!

Since the early 1900s, Israel has planted more than 240 million trees! A direct fulfillment of a prophecy given 2800 years earlier!

"In days to come Jacob will take root, Israel will bud and blossom and fill all the world with fruit." (Isaiah 27:6)

"I will increase the number of people and animals living on you, and they will be fruitful and become numerous. I will settle people on you as in the past and will make you prosper more than before. Then you will know that I am the LORD." (Ezekiel 36:11)

Two-thirds of Israel is desert and wilderness and has less than one inch of rain per year. Yet Israel grows more than 40 types of fruit and is one of the world's leading fresh citrus producers and exporters, including oranges, grapefruit, tangerines and the pomelit, a hybrid of a grapefruit and a pomelo, developed in Israel! The country has been described as an “economic miracle”. Clearly, Israel’s cities and land are prospering. 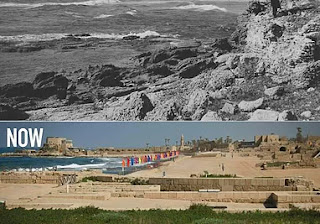 "As birds flying, so will the LORD of hosts defend Jerusalem; defending also he will deliver it; and passing over he will preserve it." (Isaiah 31:5)

In December of 1917 the British Commander General Allenby and his army approached the city of Jerusalem held and strongly fortified by the Ottoman Turks.
In order to gain information about the Turkish defenses he had two British airplanes fly in low at high speed to and fro, back and forth over the city. 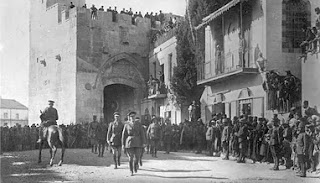 This scared the Turks, many of whom had never seen an airplane and to their untrained ears the name of Allenby, the British commander took on the sound of "allah's bey" meaning god's will and so they fled their positions, surrendered the city to Allenby without firing a single shot nor was a single structure damaged.

Many recognize that the deliverance of Jerusalem in 1917 was miraculous. The city was taken WITHOUT A SINGLE SHOT BEING FIRED, or without a building being damaged. It was one of the FIRST TIMES THAT AEROPLANES HAD BEEN USED in warfare and the way the city was delivered WAS BY THE PLANES flying over and dropping messages promising peace to the people. Just like God promised in Isaiah 31:5!

"Whoever assails you will fall because of you … no weapon that is formed against you will prosper." (Isaiah 54:15,17)

Since 1948, Israel has fought no less than four conventional wars against its neighbors. Despite being outnumbered more than 50 to 1, Israel has achieved overwhelming victory every time.
In 1967 for example, the armies of Egypt, Jordan, Syria, Lebanon (and later Iraq) attacked Israel with the goal “to wipe Israel off the map”. Israel defeated the attack in just 6 days even though the Arab armies had huge superiority in armour, aircraft and troops! 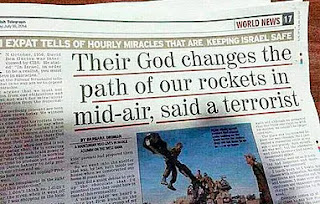 The existence of the State of Israel and the fact that there were so few casualties from the scud missiles that exploded in densely populated areas in Israel during the Gulf War, would appear, on the surface, to be a stroke of luck. However, it is just God protecting Israel as He promised to do so thousands of years ago.

See Part 1, for two of the most amazing and significant prophecies fulfilled by Israel, the "Super Sign" of the end times, here!