"But do not measure the court outside the temple; leave that out, for it is given over to the nations, and they will trample the holy city for forty-two months." (Revelation 11:2)


Through the clear word of Scripture, we can be confident that there will indeed be a Third Temple rebuilt.

Signs that may fulfill this prophecy:

1. Passover sacrifices are being held near the Temple Mount.
2. The specific breeds of animals needed to engage in the Temple sacrifices described in the Torah are being reintroduced into Israel. (It is fascinating that this particular breed of sheep and goat has the very rare quality of having four horns. Within the prophecy of Daniel, we find just such a goat)
3. Modern DNA technology allows the identification of those who can serve as priests in the Temple once it is constructed.
4. An altar, priestly garments, and other materials which would be needed to conduct services at the Temple have been created.

The components of the Temple are currently in place, it will not take long now to complete the actual building. 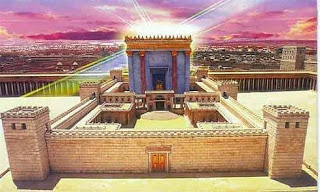 "He will confirm a covenant with many for one 'seven.' In the middle of the 'seven' he will put an end to sacrifice and offering. And at the temple he will set up an abomination that causes desolation, until the end that is decreed is poured out on him." (Daniel 9:27)


This and other passages of prophecy seem to indicate that there will be some form of treaty or "covenant" between Israel and their cousins in the Arab world, and that this agreement will mark the beginning of the final seven years (Great Tribulation) to the Second Coming of Jesus!

The potential signing of a Middle East peace treaty between Israel and the Palestinians - and by extension the Arab world - is already in process today!

Donald Trump is pushing for a Middle East peace treaty, saying he would 'do whatever is necessary' to reach a peace agreement in the Middle East.

Donald Trump has planned to discuss the challenge and efforts to forge a Middle East peace agreement this week at the UN General Assembly. Check it out here.

Since both of these prophecies - the rebuilding of the third temple, and the Middle East peace treaty take place after the rapture, we are no doubt in the end times, and the return of Jesus Christ is imminent!