"His invisible attributes are clearly seen, being understood by the things that are made" (Rom 1:20)

"All things came into being through Him" (John 1:3)

"Where were you when I laid the foundations of the earth ... who determined its measurements?" (Job 38:4,5)

The Bible clearly states that the earth is designed. Some describe God as 'the Master Engineer'. Engineering relies upon numbers and mathematics, and so it is not surprising to find amazing numbers and mathematics embedded in God's creation (as well as in the Bible). In God's creation, there exists a "Divine Proportion" that is exhibited in a multitude of shapes, numbers, and patterns whose relationship can only be the result of the omnipotent, good, and all-wise God of Scripture. This Divine Proportion—existing in the smallest to the largest parts, in living and also in non-living things—reveals the awesome handiwork of God and His interest in beauty, function, and order. This “golden” number, 1.61803399, represented by the Greek letter Phi, is known as the Golden Ratio, Golden Number, Golden Proportion, Golden Mean, Golden Section, Divine Proportion and Divine Section. When we take any two successive (one after the other) Fibonacci Numbers (0, 1, 1, 2, 3, 5, 8, 13, 21, ... etc), their ratio is very close to the Golden Ratio. 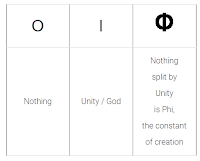 Curiously, the mathematical constant of 1.618 … that is found throughout creation is represented by the symbol Phi, which is the symbol 0 for nothing split in two by the symbol 1 for unity and one. Could this be the true meaning behind the symbol Phi?

Here are just a few examples of the golden ratio within the human body, DNA, solar system, nature, and the Bible... 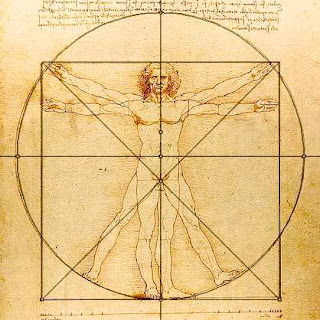 Note that not every individual has body dimensions in exact phi proportion but averages across populations tend towards phi and phi proportions are perceived as being the most natural or beautiful.

Other examples in the human body:
1. When women are at their most fertile, between the ages of 16 and 20, the ratio of length to width of a uterus is 1.6 – a very good approximation to the golden ratio.
2. The measurement from the belly button to the floor and the top of the head to the belly button is the golden ratio.
3. The human hand has 5 fingers, and each finger has 3 phalanges separated by 2 joints. Curiously enough, you also have 2 hands, each with 5 digits, and your 8 fingers are each comprised of 3 sections. All Fibonacci numbers! In addition, looking at the length of our fingers, each section — from the tip of the base to the wrist — is larger than the preceding one by roughly the ratio of phi.
4. Your hand creates a golden section in relation to your arm, as the ratio of your forearm to your hand is also 1.618, the Divine Proportion.
5. From your toes to your belly button it is 1.618 times longer than your belly button to the top of your head. 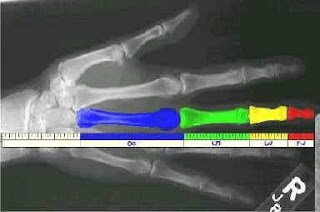 DNA can form a wide range of double helical structures and the most common form is B-DNA (Crick and Watson). The 'pitch' (one full 360 ° rotation of the helix) is just 34 angstroms, whilst the diameter of the B-DNA helix is variously given as 20 link or 21 angstroms, link.
The DNA molecule measures 34 angstroms long by 21 angstroms wide for each full cycle of its double helix spiral. These numbers, 34 and 21, are numbers in the Fibonacci series, and their ratio 1.6190476 closely approximates Phi, 1.6180339.
So the geometry of the most common DNA molecule might be seen to reflect the divine proportion: 34/21 = 1.6190. 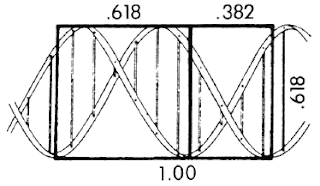 It has been shown that the average of the mean orbital distances of each successive planet in relation to the one before it is 1.61874, very close to Φ.

1. The number of petals in a flower consistently follows the Fibonacci sequence. Famous examples include the lily, which has three petals, buttercups, which have five, the chicory's 21, the daisy's 34, and so on.
2. Honey bees, follow Fibonacci in other interesting ways. The most profound example is by dividing the number of females in a colony by the number of males (females always outnumber males). The answer is typically something very close to 1.618.
3. The tail of a seahorse has the mathematical formula of 1.1618, as do seashells, all kinds of flowers, sunflowers and plants, pineapples and pine corns, snails,  as well as spirals in a hurricane or a tornado.

1. The Ark of the Covenant is constructed using the Golden Section, or Divine Proportion. The ratio of the Ark of the Covenant is 2.5 to 1.5, which is 1.666…, as close to phi (1.618 …) as you can come with such simple numbers and is certainly not visibly different to the eye.
2. The end of Noah's ark, is 50 by 30 cubits, which is the ratio of 5 to 3, or 1.666…, again a close approximation of phi not visibly different to the naked eye. Noah’s ark was built in the same proportion as ten arks of the covenant placed side by side.
3. The beast, regarded by some as the Anti-Christ described by John, is thus related to the number 666, one of the greatest mysteries of the Bible. Curiously enough, if you take the sine of 666º, you get -0.80901699, which is one-half of negative phi.

In each case we see the hand of understanding and design, and often this appears to point to Christ as the Designer. The pervasive appearance of phi throughout life and the universe is the signature of God, a universal constant of design used to assure the beauty and unity of His creation.