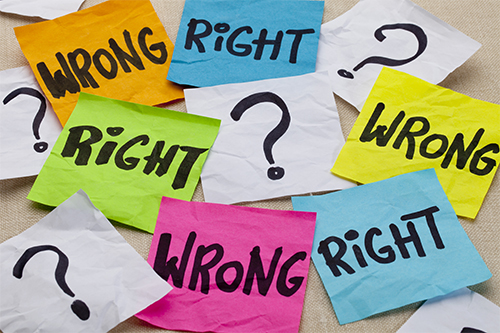 "Even Gentiles, who do not have God's written law, show that they know his law when they instinctively obey it, even without having heard it." (Romans 2:14)

1. There are two different types of truths. First let's define the two:
So Premise 1 says that objective moral values and duties (objective truths) would not exist without God. If we were to imagine what it would be like without God, and that evolution were true, then humans would just be the products of evolution, just as animals are, and there would be no qualitative difference between the two. Natural selection would reinforce behavior that leads to personal or group survival. If the evolutionary worldview were true, we would be advanced animals acting on chemical impulses. Absolute moral standards would not exist. Therefore, Premise 1 is certainly true.

Many evolutionists acknowledge that evolution does not provide a basis for morality. William Provine, evolutionist and biology professor at Cornell University, states,

No ultimate foundations for ethics exist, no ultimate meaning in life exists, and free will is merely a human myth.

Thus, if evolution is true, then there can be no universal moral code that all people should obey.

2. There is a universal Moral Law-

How do we know what “good” is? How do we know what “evil” is? Each of us are born with an innate sense of morality, each fundamentally knowing what is right and wrong. We all have within us the sense of right behavior and character. Every person on earth has this strange idea that they should behave in a certain way, and cannot really get rid of it. This is called the Moral Law. There are moral facts such as, “lying is wrong”, or “murder is wrong” that almost everyone would agree with. If there are no objective truths, then who is to say that Hitler was objectively morally wrong? The universe has a real law, which none of us made! Humans have an intuitive sense of right and wrong, and it is incredible to consider that no matter time, culture, geographic location, or people, the Moral Law has been universally acknowledged.

3. If there is a universal Moral Law, there is a Moral Law-giver- There can’t be something that is being carried unless there is something else that is carrying it. There can’t be something that is popular unless there are lots of people that like it. Commands are the exact same; commands can’t exist without something else existing that commanded them. Evolutionists might argue that the Moral Law can be created without God, however, this thinking is irrational and results in ridiculous explanations to try and explain away. If it was possible for everyone to create his or her own morality, then no one could judge the morality of others. How could we argue that it is wrong for others to murder if morality is determined by our “own feeling” and we have no starting foundation? But there is an objective Moral Law, and none of us made it, therefore there must be something else that produced the Moral Law, a Moral Law-giver.

Therefore, there is something beyond the universe...

Together with the the cosmological argument, this would give us proof that there is a perfect, necessary, and eternal being that created the universe with life in mind and has the authority to tell us how we are to run it. Apart from biblical creation, morality has no justification.

If someone were trying to disprove the moral argument, he’d have to use the moral laws in his attempt, thereby refuting himself.


I hold that belief in God is not merely as reasonable as other belief, or even a little or infinitely more probably true than other belief; I hold rather that unless you believe in God you can logically believe in nothing else. - Cornelius Van Til (1895–1987) [Christian philosopher and theologian]