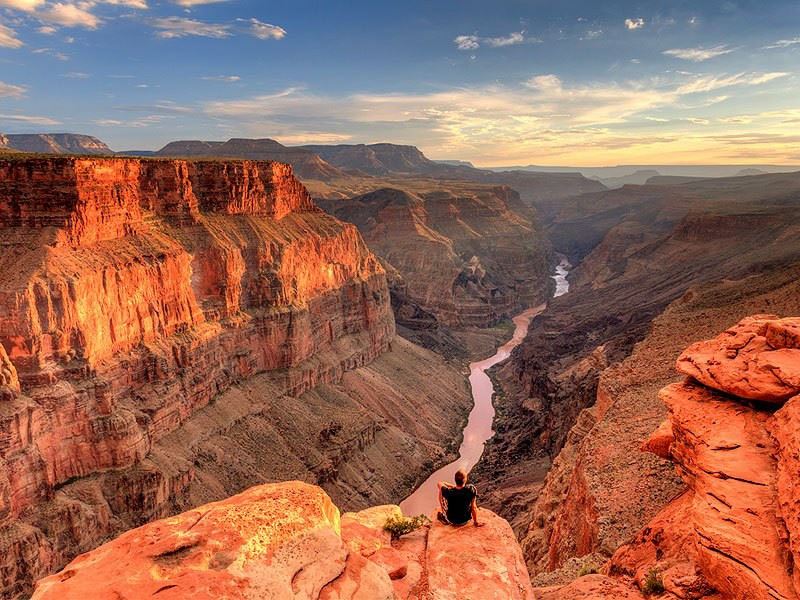 How was the Grand Canyon formed?

Firstly, there are two facts which both creationists and evolutionists agree with regarding the Grand Canyon. These are that:

All geologists currently agree that the Colorado River began flowing out of the western Grand Canyon only recently. How recently? According to most secular geologists, within the last one-thousandth of the earth’s history (i.e. 1,800,000 years ago)!


"Did the Colorado River exist anywhere in Pliocene time? If not, how and when may it have come on the scene? ... There are, so far as known, no true river deposits older than Pleistocene along the entire course of the Colorado River—that is, deposits of the specific type that such a river normally lays down."1

On opposite sides of the western Grand Canyon, there are three different pairs of water-transported rocks found, that are each similar to one another. These rocks would have been unable to pass from side to side, if the plateau, in the canyon, had blocked the way. Therefore, those rocks were first transported, then the Grand Canyon was cut through them and the Colorado River began flowing out of the western end of the Canyon. Since 1934, geologists have been trying unsuccessfully to find a previous location for the river or to learn why the river began so recently.

2. After the plateau was in place, the Grand Canyon was carved right through the plateau, instead of going around it.


“Oddly enough, the Grand Canyon is located in a place where it seemingly shouldn’t be. Some twenty miles east of Grand Canyon Village, the Colorado River turned sharply ninety degrees, from a southern course to a western one and into the heart of the uplifted Kaibab Plateau. . . . It appears to cut right through this uplifted wall of rock, which lies three thousand feet above the adjacent Marble Platform to the east.”2

Creationists also agree that the Grand Canyon was carved right through that plateau. The Colorado River makes a sharp right turn at the edge of the plateau to flow through the plateau and the Grand Canyon, instead of around it. This, however, presents a problem (as you will soon find out) for secular geologists and evolutionists who, for over the past 150 years, have been teaching that the Colorado River carved the canyon over millions of years! (See Figure 6-5)

“Though scientists have studied the canyon for more than 150 years, a definitive answer as to how or when the canyon formed eludes them. The one thing scientists do agree on is that the canyon was carved by the erosive power of the Colorado River, but the river itself has carried away the evidence of its earlier history.”3


What can we observe?

There are two facts, that alone, make the evolutionary interpretation of a little water and a lot of time impossible: 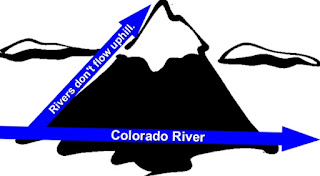 2. There are no mud or sand sediments to be found at the river delta. Close to 1,000 cubic miles of material has been eroded to form the Grand Canyon! The expected, massive delta (built up layers of excessive sediment that waves and tides are unable to carry all away) contains only a small fraction (not even 1%) of this eroded material. There should be trillions of deposits if it has been eroding for millions of years! Where did it all go?

As I mentioned earlier, most creationist geologists believe that the Grand Canyon was formed by a catastrophic dam-breach event. Here's an example, from Teton Dam in Idaho, of what a dam-breach looks like:

Evolutionists are teaching that canyons form with a little bit of water, and a lot of time. However, here we can see an example of an enormous canyon forming very rapidly with a lot of water and little bit of time. (This is not uncommon - we often hear of stories about floods sometimes creating other mini "grand canyons", and these have been observed to form in just days to weeks) We cannot observe the evolutionists' explanation because it would take far too long, and therefore becomes part of what they believe, not scientific observation. On the other hand, a rapid formation explanation from a breached dam can be observed naturally, and is scientific observation.


For the above reasons, mysteries surround the formation of Grand Canyon for secular geologists and evolutionists.

“Grand Canyon is a puzzle, a mystery, an enigma. It appears to have been carved through an uplifted plateau, ignores fault lines, may have been born by a river that once flowed the other way, is possibly quite old or quite young – or both – and is set within a more mature landscape.”4

"For all its glorious views, the Colorado Plateau remains an ugly mystery to geologists. They can’t figure out why and how it rose thousands of feet over the millions of years it took to carve spectacular natural wonders like the Grand Canyon and Monument Valley."5

To these so-called experts, the canyon’s birth remains a hazy mystery, cloaked in intrigue, and filled with enigmatic puzzles.


Other Problems with Evolutionary Worldview

3. Unusual location. The location of the Grand Canyon is also quite strange. The area in which it is located has been known to receive little rainfall. Given the evolutionary explanation, it should be expected that numerous other “Grand Canyons” would be of existence in locations where conditions are far more extreme.

4. No evidence of “missing” millions of years (of erosion). Today we see the effects of weathering and erosion all around us. But where is the evidence of millions of years between rock layers in the Grand Canyon? There is none. Instead, we see evidence of continuous deposition of one layer after another, with no time for erosion. Consistent with the Genesis flood.

5. Millions of nautiloid fossils unexplained. Nautiloids are extinct sea animals which have squid-like features enclosed in chambered shells. Seven-foot thick fossil beds running along the full 277 miles of the canyon, and beyond, have been found to contain tens of millions of nautiloid fossils with an average of one fossil per four square meter, and with nearly one in seven fossils standing vertically! Amazingly, one zone of a rock has been found to contain so many nautiloids buried horizontally, that it can just about only be explained by a worldwide flood!

Time precludes further examples of problems here. But it's quite clear that, the river forming the canyon slowly over millions of years not only defies logic, but is also a complete assumption that is based on first assuming evolution is true in order to claim there is evidence for evolution.