ELS in the Bible 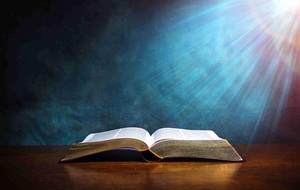 For verily I say unto you, Till heaven and earth pass, one jot or one tittle shall in no wise pass from the law, till all be fulfilled." (Matthew 5:18)

Jesus Christ stated that even the smallest of the letters and grammatical marks (jot and tittle) in the original text of the Bible were directly inspired by God.

Equal-distance (or Equidistant) Letter Sequences can be discovered when, instead of reading a text normally––one letter at a time––hidden words are looked for by reading the text every 2, or 3, or 4, (etc.), letters, skipping over the letters in between. The Bible is the only literature in existence that contains numerous hidden ELS placed within the scriptures in an intentional manner! This phenomenon is only found within the original Hebrew Bible, the Old Testament, and in the New Testament, Aramaic! Here are a few examples of this phenomenon in English...

1. Genesis 1:14: "And God said, Let there be lights in the firmament of the heaven to divide the day from the night; and let them be for signs, and for seasons, and for days, and years:"

The word "seasons" here, translated "HaMoyadim", means "the appointed times." When searched for as an equidistant letter sequence, the word appears only once in the Book of Genesis, at the interval of 70, clustering EXACTLY where the word is spelled explicitly in the text, and where the calendar is established. In addition, there are only 70 specially appointed times for holy days called HaMoyadim, in a year, as defined by Leviticus 23-52. The very interval where HaMoyadim, "the appointed times," is encrypted in the text. Coincidence? (The longer the word, the smaller its chances to be found in the text at any given interval. The odds against this have been estimated at more than 70,000,000 to one.)

4. The word "Eden" is encoded repeatedly sixteen times within the relatively short Genesis 2:4-10 passage of only 379 Hebrew letters dealing with the Garden of Eden. The odds against sixteen "Edens" occurring by chance in such a short passage is one chance in ten thousand.

In this same chapter, scientists have found twenty-five different Hebrew names of trees encoded within the text of this one chapter (Garden of Eden chapter)! The laws of probability indicate that the odds against this occurring are one hundred thousand to one.

5. In Isaiah 53, the Suffering Servant chapter, over fifty names that deal with Christ's crucifixion are encoded in equidistant letter sequences! Messiah, Yeshua, the three Marys, ALL of the Disciples' names, Herod, His Cross... (See all of them here). It's also been found that All, passages prophesying the coming Messiah contain the name of Jesus encoded within them!

6. The first five books of the Bible (the books of Moses) are known as the Torah. In 50 letter increments, we find the letters spelling "Torah" in the first two books of the Torah. In the third book, the book of Leviticus, it doesn't seem to work. But it does work for YHWH, the sacred name of God ("Yahweh" or "Jehovah," translated "LORD" in the King James Version), if you count in 7 letter increments. The last two books spell out "Torah" again in 50 letter increments, but this time backwards. Amazingly, each book of the Torah appears to be pointing towards the Name of God! Check it out:

The number 50 has several important meanings (e.g. The Torah was given 50 days after the Exodus from Egypt), and the use of seven with the name of God shouldn't surprise us! Furthermore, it turns out that TORH is spelled out more than 56,000 times in the Book of Genesis (with various skip lengths)! Genesis itself is slightly more than 78,000 letters long. Coincidence?

There is no other literature in existence which contains hidden ELS in the manner given here. Numerous other Hebrew texts containing about the same volume of material as the book of Genesis have been tested with no ELS being found. The above examples, which are only a small sampling of the discoveries which have been made, demonstrate supernatural complexity: hiding that much coded information of any type in any 'surface text' is far beyond the capabilities of any existing computer and any computer technology that can reasonably be envisioned. The possibility of these ELS appearing anywhere by pure chance is mathematically impossible.

And remember, to plan this kind of thing wouldn't just take years, but to prepare the text as well, with perfect grammar, a message, and no contradictions, puts the statistical odds of it being humanly written as impossible. Despite many arguments and challenges, the data still stands uncontested. We are left with the undeniable conclusion that this phenomenon is another clearly authenticated signature of God upon the pages of His message to mankind.

Dr. David Kazhdan, chairman of the mathematics department at Harvard University, warns those who casually reject the evidence of the ELS in the Bible:


"The phenomenon is real. What conclusion you reach from this is up to you."