"See, Damascus will cease from being a city; it shall be a ruinous heap." (Isaiah 17:1) 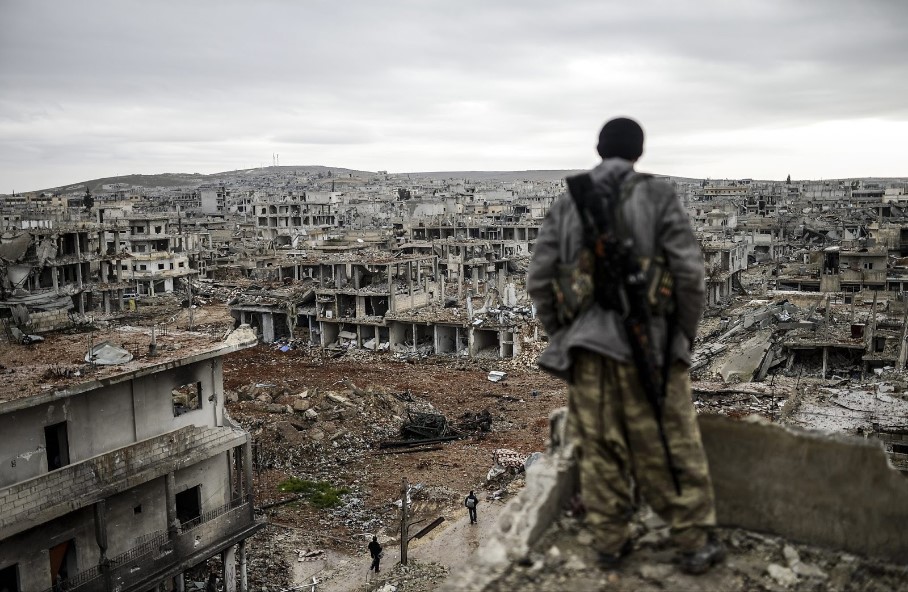 Did you know Damascus is the oldest continuously inhabited city in the world? Yet, despite its long history, the Bible says Damascus will come to a sudden end (Jeremiah 49:23-27 and Isaiah 17). The prophet Isaiah says Damascus will disappear, become a heap of ruins, and see its power and influence end forever (Isaiah 17:1-3). At the same time, large parts of northern Israel will also lie in ruin (Isaiah 17:3).

With current events, it's not difficult to envision the scenarios outlined in Isaiah 17. On April 14, Syrians were awoken by the sounds of about 120 missiles/bombs sent against areas of their country. US President Trump had led a coalition with the United Kingdom and France in a missile attack against Syrian President Assad’s chemical weapons laboratories in response to a chlorine attack Assad allegedly perpetrated against the Syrian town of Dhouma, in which dozens of civilians were killed.


"What America waged in an aggression on Syria is a crossing of red lines. From now on we will respond with force to any aggressor or any breach of red lines from whoever it is and America knows our ability to respond well".


To make matters worse, only hours later Israel bombed an Iranian base near Aleppo Syria. The rising multinational tensions in Syria burst into flames. U.N. Secretary-General Antonio Guterres explained that the Middle East is in great “peril,” and that Syria represents “the most serious threat” that could easily tip the scale toward “escalation, fragmentation and division as far as the eye can see with profound regional and global ramifications.”

Not only does this recent conflict have the potential of descending into full-scale war, but Iran is now preparing for a direct assault on Israel, even setting a date for Israel's destruction. But make no mistake, if Israel is attacked with weapons of mass destruction, its response will be swift and devastating. Israel is armed with nuclear weapons, and if its survival is put in question, it will not hesitate to use them. Just last week, following the bombing of an airbase that resulted in several Iranian Republican Guard deaths, including a Colonel, senior Israeli security officials threatened that if Iran strikes at Israel from Syrian territory, "Assad's regime and Assad himself will disappear from the map." They warned, "Our recommendation to Iran is that it does not try to act because Israel is determined to continue on this issue to the very end." Could this be what eventually destroys Damascus?

At the same time, current events in Syria have also firmed up the alliances for future confrontations between Israel, the West and the alliance which will eventually come against Israel (Ezekiel 38 & 39: The Magog Invasion), as the other side (Russia, Syria, Iran) threaten their own responses at both Israel and America.

Interestingly, just over a week earlier, on Wednesday, April 4, Russian President Vladimir Putin and Turkish President Recep Tayyip Erdogan met with Iranian President Hassan Rouhani to discuss Syria’s future at a summit in the Turkish capital of Ankara. According to reports, Russia, Turkey, and Iran are working together to create “de-escalation zones” to end the seven-year civil war in Syria. See: Iran, Russia and Turkey meet to plan Syria's future — without U.S.

Let me remind you that the nations involved in the invasion force that attacks Israel, identified in Ezekiel 38:5–6, are:


Look back at the bolded names on the list. Russia, Iran, and Turkey are now collaborating. Meanwhile, Libya and Algeria are already closely aligned with Russia and hostile to Israel, and Sudan is a radical Islamic Sunni state allied with Iran and Russia that is anti-Israel. The alliance of these nations makes it clear the stage is now being set for the Gog of Magog War. Syria is not mentioned as part of the invasion force that attacks Israel in Ezekiel 38, perhaps because it is destroyed by then.

Of even more significance, on February 10, an Israeli F-16D jet was shot down by Syrian military for the first time in 36 years! (See here) This was seen as a triumph in the Muslim world in that the ‘mighty’ technological and superior Israeli war-machine can be taken down. This event is very singular in that it has escalated the war in Syria wherein Israel is now in open conflict with Iran as a USA-copied Iranian drone was shot down over Israeli territory.

Conditions are ripe for a present day destruction of Damascus. The terrible destruction that awaits Damascus (Isaiah 17:1), northern Israel (Isaiah 17:3), and the entire Gog of Magog Alliance (Ezekiel 38:19-22), is about to be fulfilled. The pieces of the prophetic puzzle are rapidly coming together and the 70th Week of Daniel is fast approaching...

Considering the fact that Damascus is merely 136 miles away as the crow flies to Jerusalem, and only 91 miles from Megiddo, from which Armageddon gets its name in the Bible, what are the odds that such a location could have been predicted 2,000 years ago as the final stage of global war?