Today, in this generation, we have seen the foundation being laid for a one-world religion, and this was prophesied almost 2000 years ago! 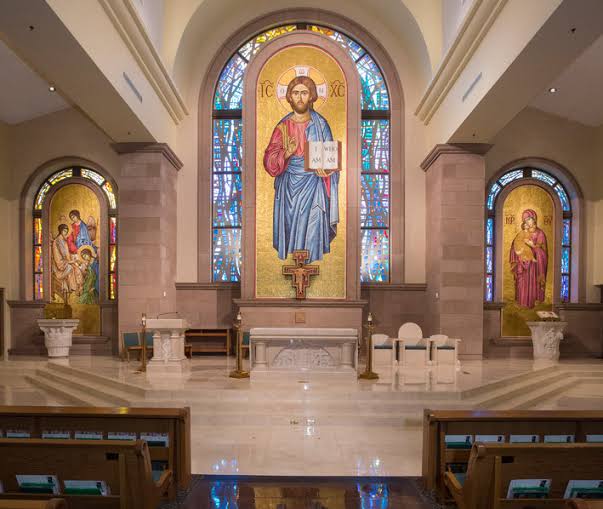 The one-world religion, that will exist during the tribulation period, is symbolized in Chapters 17 and 18 of Revelation by a Woman who rides on a beast.

The Beast that the woman rides appears to be the same one as in Revelation 13:1-10 and Daniel 7:19–24. This Beast is the revived Roman Empire, which could be today's European Union, see here.


What is the identity of this religious system?

1. She is a City (17:18). The Scriptures clearly reveal that this woman is a symbol of a “great city”, and some believe this city is the Vatican City - the seat of the Roman Catholic Church - an epitome of Church and City combined (just like Babylon)!

2. The city sits on seven hills (v. 9) and there is a sea port in the distance (18:17-19). The Roman Catholic Church has its headquarters (the Vatican) situated on seven hills. In the Encyclopedia Britannica, Rome is identified as, “The city of the seven hills, of treasures and tourists…” (Vol. 26, p. 980). The Catholic Encyclopedia states, “It is within the city of Rome, called the city of seven hills, that the entire area of Vatican State proper is now confined”1. Rome is also located right by the Tiber River and is about 15 miles from the Tyrrhenian Sea (part of Mediterranean Sea).

3. On her forehead is her name: Mystery, Babylon (v. 5). The Bible often addresses a person or city under another name (e.g. Jerusalem is called "Sodom and Egypt" (Rev 11:8)), and interestingly, Rome was also known as Babylon. In his book, Catholicism and Fundamentalism, Catholic apologist Karl Keating writes: "Babylon is a code word for Rome. It is used that way six times in the last book of the Bible"2, and in extrabiblical works such as Sibylling Oracles (5, 159Q, the Apocalypse of Baruch (ii, 1), and Esdras (3:1). John couldn't come out and say that Rome would be judged and destroyed, as that would have invited more persecution.

4. She is “the great whore…with whom the kings of the earth have committed fornication…” (v. 2). This is spiritual fornication, and only Rome, the headquarters of Roman Catholicism, fits this characteristic. For instance, the ecumenical movement in 1986 saw Pope John II gather in Assisi, Italy, with leaders of the world's major religions to pray for peace: snake worshippers, fire worshippers, spiritists, animists, Buddhists, Muslims, Hindus, and North American Indian witch doctors. All to the “same God.”

5. The city “rules over the kings of the earth” (v. 18). In John's day it was the Rome of the Caesars that ruled the world. After the Caesars lost their power, the popes, during certain periods of history, have exercised their authority over certain kings. One eighteenth-century historian counted 95 popes who claimed to have divine power to depose kings and emperors.

6. The Beast she rides is the revived Roman Empire (13:1). No city ruled the Roman Empire but Rome. Therefore, it would make sense if the Roman Catholic Church has control over the revived Roman Empire. Interestingly, throughout most of continental Europe, there is a great push for full European unity, and one of the major players behind it is the pope himself. The Sunday Telegraph, in 1991, summed up the Pope's plans for the 'evangelisation' of Europe. It stated: 'He is calmly preparing to assume the mantle which he solemnly believes to be his Divine Right—that of new Holy Roman emperor, reigning from the Urals to the Atlantic.'

7. The identifying name, “Mystery” (v. 5). Mystery is at the very heart of Roman Catholicism: the mystery of the Eucharist; etc. Custodian of mysteries which permit trading “in the souls of men” (Rev 18:3), such as mass cards and indulgences, et al. Every sacrament, from baptism to extreme unction, manifests the mysterious power which the faithful must believe the priests wield, but for which there is no visible evidence.

8. She is clothed with “purple and scarlet” (v. 4). The priests of Rome wear shades of purple and scarlet. The Catholic Encyclopedia declares: “Cassock (also called Soutane) - The close-fitting, ankle-length robe worn by the Catholic clergy as their official garb .... The color for bishops and other prelates is purple, for cardinals scarlet...”3


9. She is “adorned with gold and precious stones and pearls” (v. 4). The Popes wore a crown, called a papal crown/tiara, in the past, and, wear today, a pectoral cross. Both are decorated with gold and gemstones. The Catholic Encyclopedia declares: “The pectoral cross should be made of gold and… decorated with gems…”, and “The papal crown, a costly covering for the head, ornamented with precious stones and pearls...”4

10. She is wealthy beyond calculation (v. 4). There is no church, no city which is a spiritual entity, no religious institution past or present which even comes close to possessing the incalculable wealth of the Roman Catholic Church.


11. She has a golden cup in her hand (v. 4). This is the holiest instrument in Roman Catholicism: the golden chalice of the Eucharist. The Catholic Encyclopedia calls the gold chalice "the most important of the sacred vessels...."5  The Roman Catholic Church possesses literally hundreds of thousands of solid gold chalices.


12. The golden chalice is filled with the “filthiness of her abominations” (v. 4). This could include the sacrifice of the Mass, the very heart of Roman Catholicism, and a denial of the completed work of the cross. Hundreds of thousands of Christians throughout history, for instance, were burned at the stake for refusing to participate in the Mass, which they earnestly believed was the “greatest abomination conceivable”.

13. The Woman is the “Mother of Harlots” (v. 5) and calls herself “queen” (v. 17; 18:7; Isaiah 47). As well as spiritual harlots, Roman Catholicism has created literal harlots (prostitutes) by the millions. For centuries it was a favorite joke that Rome had more prostitutes than any other city because she had the most celibates. Catholic historian and former Jesuit Peter de Rosa writes: "Popes had mistresses of fifteen years of age, were guilty of incest and sexual perversions of every sort, had innumerable children, were murdered in the very act of adultery [by jealous husbands who found them in bed with their wives]..."6 In addition, tens of millions follow the apparition of Mary, who is regarded as the Mother of the Church, the Lady of All Nations, the Co-Redemptrix, and the “Queen of Heaven”.


14. The Woman is “drunk with the blood of the saints, and with the blood of the martyrs of Jesus” (v. 6). No institution on earth has more aggressively and consistently slaughtered those who adhered to the Gospel of Christ. For centuries, to disobey the popes was heresy punishable by death. J.H. Ignaz von Dollinger, a leading nineteenth century Catholic professor of Church History, confessed: "[S]ince 1183, the view of the Church had been ...[that] every departure from the teaching of the Church ...must be punished with death, and the most cruel of deaths, by fire."7

15. The figure is a Woman. The central figure of Roman Catholicism is a woman: a false sinless, perpetually virgin, all-powerful “Mary” whom Rome invented and worships.

16. The Woman would go out over the face of the whole earth, and her final destination would be Babylon in the land of Shinar (Zechariah 5). Interestingly, the apparition of Mary claims that she will soon travel through the entire world saving those who look to her.

17. Rome has its spiritual foundations in Babylon from its occultic origins, the Tower of Babel, and the attempt to reach heaven by steps of its own making.

18. The "little horn" of Daniel (a symbol of the false church and especially its spokesman, the false prophet) speaks "pompous words" against God and intends to change TIMES and LAW (Daniel 7:25). One Roman Catholic writer quotes: “. . . the pope can modify divine law, since his power is not of man, but of God, and he acts in the place of God upon earth, with the fullest power of binding and losing his sheep."8 The pope not only claims to be God, but can modify divine law! Just one example of this would be the Catholic Church CHANGING God's commanded seventh-day Sabbath (Exodus 20:8-11; Hebrews 4:9-11). They substituted the pagan "day of the sun" in place of God's Sabbath.


Could it be the Roman Catholic Church?

The evidence is strong for this religion having its origins, at least in part, within the present-day Catholic church. But it could turn out to be Islam, the New Age movement, or some form of religion not even invented yet, so I wouldn't be dogmatic about it being the Roman Catholic Church. Likewise, the city could still be a literal Babylon in Iraq (instead of Rome), and the arguments for it being this city are just as convincing. See: The Rebirth of Literal Babylon

Regardless of the true identity of Babylon, what's remarkable is the growth in religious pluralism, interfaith dialogue that promotes the idea that all religions are equal, and the erroneous teachings that many ways lead to God or to heaven - which all exist today! There also has to be a common denominator between religions, and elements that are attractive to many, for a one-world religion to exist, which is what we see today...

For instance, the frequently uttered phrase of Catholic apologists is “home to Rome” with one group actually named “the Coming Home network”. These organizations all talk about bringing people to Rome—but never to Christ. This is important as a Muslim would not willingly join an organization if the biblical Jesus were presented.

Within Catholicism are the many alleged apparitions of Mary, including those at “Fatima.” John Paul II attributed his survival from the May 13, 1981, assassination attempt to the intervention of the Virgin of Fatima. The favorite daughter of Muhammad was named Fatima! The Koran exalts Mary, not Jesus. The Roman Catholics also exalts Mary. This along with the numerous alleged apparitions of Mary witnessed by both Muslims and Catholics creates a link between the two religions. According to a British-Catholic magazine,


“A Marian revival is spreading throughout Africa with alleged apparitions of Mary, finding a following among the Muslims.”

Although African Muslims are supposedly seeing apparitions of the Virgin Mary, they “are not required to become Christians to follow her.” The pope, being an enthusiastic promoter of Mary, has actually used this commonality to snare the interest of those within Islam, today, and there has been a response! In fact, ever since Pope Francis came in, he has been pushing for global unity in religious matters. But the pope is not alone. Today, as never before, we are witnessing religions joining hands in the name of peace and tolerance. Here's some news headlines from the past:


In this generation, we have seen the foundation being laid for a one-world religion, and this was prophesied almost 2000 years ago!


"For the time is coming when people will not endure sound teaching, but having itching ears they will accumulate for themselves teachers to suit their own passions, and will turn away from listening to the truth and wander off into myths" (2 Timothy 4:3-4).