Could Vladimir Putin be Gog?

According to Scripture, an aggressive and authoritarian ruler identified as “Gog” will arise from Russia (known in Biblical times as “Magog”) to lead a coalition of nations against Israel, in what is known as the Ezekiel 38-39 war, in the last days.

Since this ruler is likely that of either a current or future leader of Russia, and the stage appears to be set for the Ezekiel 38-39 war, there may well be a credible candidate for Gog, and there is: Vladimir Putin. Little is known about this man, who was catapulted from obscurity into the seat of Russian power. What is known, however, is that Putin very closely fits the description of Gog...

1. Gog is a dictator with such powerful reputation to where countries of the world hesitate to confront him directly (Ezekiel 38:13). Putin is an undisputed dictator, and him and his Russia are already becoming so powerful that no one in the world can stop them. Forbes has named Vladimir Putin the world’s most powerful person four years in a row. Garry Kasparov in his book, "Winter Is Coming" says, “Putin’s Russia is clearly the biggest and most dangerous threat facing the world today.” Time magazine (2014) makes the case that Vladimir Putin does not see himself as Russia’s president or prime minister but rather as her modern Czar (Gog is a title like “Czar”). Putin is certainly living up to his name - Vladimir - which means: Universal ruler! 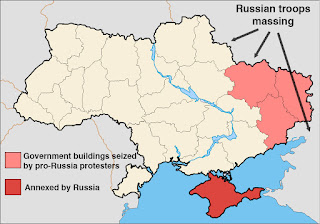 2. Gog invades the tiny nation of Israel (Ezekiel 38). Putin and his Russia have a history of moving in and conquering weak nations. Putin's invaded the country of Georgia (occupies 20 percent of the country), southern Ukraine's Crimea peninsula (annexed it, made it part of Russia), eastern Ukraine (controls it today), and has taken over the Syrian government. According to Joel C. Rosenberg:


"He is invading one country after another, and you know the saying, 'If you give a mouse a cookie, he'll want a glass of milk. Putin has eaten a whole bag of Oreos, and now he just grabbed the dairy farm and no one is stopping him."


3. The manner in which Gog invades Israel is fast and overpowering (Ezekiel 38:9; Daniel 11:44). Putin has a record of calculated and overpowering violence. Masha Gressen in her book, "The man without a face" says, "...Putin painted himself as consistently rash, physically violent man with a barely containable temper." For instance, Putin's childhood friend recalls that:


“If anyone ever insulted him in any way, Vladmir would immediately jump on the guy, scratch him, bite him, rip his hair out by the clump – do anything to humiliate him in any way… he would flare up and start expressing his outrage. He did this several times over”

Putin's overpowering violence and impulsive temper which manifested through the tentacles of the KGB/FSB (Russian intelligence agencies, the organizations Putin was a part of before becoming president), resurrected vertical power enabling him to effectively head a security state much like Hitler's Nazi SS. Is this the same barely containable temper that will “go forth with great fury to destroy, and utterly to make away many” (Dan. 11:44)?

4. Gog’s motive for invading is to steal Israel's resources (Ezekiel 38:12). Putin is also infamous for taking what doesn't belong to him, including personal items and corporate assets that belong to other individuals and companies. One notable example is when Putin shutdown Russia’s largest privately owned oil & gas firm, Yukos, and salvaged its assets.


5. Gog will likely steal Israel's massive quantities of natural gas and oil resources (see here; Ezekiel 38:12). Putin has actually completed his PhD on the subject of exploitation of natural resources! His PhD was entitled: ‘Natural resources and the development strategy for the Russian Economy’. So the idea of resource exploitation is well and truly entrenched in Putin's mind, AND he seems to have a strong urge to steal what doesn't belong to him. Not a good mix.

Interestingly, right after Israel's major oil find in the Golan Heights, Putin called the Israeli PM and offered to guard Israel’s oil and gas assets. Then, Putin ordered troops into Syria, beginning the Russian military intervention in Syria - it's possible that Putin’s interest in assisting Syria is connected to this recent oil discovery! It would appear that Putin has his eye on the spoil (Ezek. 38:12).

6. Gog will provide air cover (planes and helicopters) for the multitude of troops he has moving up the mountains on Syria's side of the border (Ezekiel 38:4-6). In the fall and winter of 2015, Putin sent hundreds of troops, many planes, helicopters, drones and other weapons to a military base in Syria. With each passing day, Vladimir Putin is getting more deeply involved in the Middle East: He's sending in more troops; better planes, helicopters and drones; and more powerful and advanced weapons. On top of that, Putin has a second base under construction; a radar and missile defense system under construction; helicopter pads, air traffic control towers, storage buildings and mobile housing units under construction, and more. Gog prepares for himself and all his allies (Ezek. 38:7).


7. Gog is masterful in secret planning and forms an evil plan (Ezekiel 38:10). Putin is, without doubt, masterful in secret planning and a man with a plan. Putin's master plan is to destroy the West by breaking up the European Union, dividing NATO, frustrating and unnerving the United States, and expanding Russia’s global influence (in an attempt to recapture the power of the former Soviet Union). Is it too difficult to imagine a time when Putin devises an evil plan against Israel?

8. Gog will attract many allies to fight with him; and he will take command of their troops (Ezekiel 38:5-7). Putin's recently met with many leaders and announced plans for Russia, along with Iran, Sudan and Turkey (all Russian allies in the battle of Gog and Magog) to step up their military co-operation! These countries respect his leadership and seem to be getting along with him.

Interestingly, in the Ezekiel 38 alliance, "Put" is with them (Ezek. 38:5). Put refers to modern day Libya, but could it also be an abbreviation for Putin?

9. Gog will act as a guard to his allies and justify his aggression as self defence of them (Ezekiel 38:7). We can see Putin "being a guard" in the recent invasions. For instance, Putin's justification for the actions in Crimea was one of help for Russian speaking peoples who feel oppressed and not represented by the political authorities who are over them.

Interestingly, there are reportedly over half a million Russian speakers living in Israel. Is it too difficult to imagine a time when the Russians, led by Putin, will storm into Tel Aviv and Jerusalem to 'protect' these Russian speakers from so called oppression? Could this be a way that Gog justifies his invasion of Israel?


10. Gog is an adversary of God (Ezekiel 38:3). Certainly this is true of Putin, since he is both a Communist and an atheist. For a long time, the leaders among those who sought to oppress and destroy human beings, and to wipe out Christianity, were Communist Russia and China.


Could Putin be Gog?

The coming person of Gog will not be known until the events of Ezekiel 38-39 take place, so it’s too early to draw such a conclusion. That being said, all of Putin's actions indicate that he could—and I strongly believe he will—fulfill a Bible prophecy that was recorded millennia ago. If Putin is indeed Gog, it seems highly likely the invasion of Israel by the northern coalition will occur in the next 6 years, for three reasons:

If Putin is not Gog, then he is certainly setting the scene for Gog to arise!