Aliens and the End Times Deception

Since 1947, UFO sightings, claims of alien abduction, and "government disclosures" have exploded. “Aliens” have appeared in movies, books, cartoons, video games, TV Series, toys: There have been well over 500 movies featuring extraterrestrials and there are hundreds of TV shows/series about aliens. Untold millions of average people now believe that aliens and UFO's exist. Certainly something is going on, but what?

The Bible warns that a powerful deception is going to take place in the last days, as mankind enters the time period Christians know as the Tribulation (Matthew 24:24; 2 Thessalonians 2:10-11). A deception so strong that it will keep most people from believing in Jesus despite the impact of millions of people disappearing during the rapture. It is my belief that the alien and UFO phenomena are part of this great deception.

Many scientists (including non-Christians), experts and theologians have come to the conclusion that the UFO phenomena are simply and precisely demonic in origin. This is because virtually all of the incidence of alien abduction or alien/UFO sightings directly parallel demonic activity as demonstrated in the Bible (e.g. Bible-believing Christians are absent among those who are abducted by aliens, abductions end when the name of Jesus is invoked by the abductee etc.). See: 10 Reasons Why Aliens Are Actually Fallen Angels or Demons


"The UFO manifestations seem to be, by and large, merely minor variations of the age-old demonological phenomenon..."[1]

It is obvious the entire UFO/abduction phenomenon is a deception. The big question is, could this be the strong deception of the end times? The Bible doesn’t directly address the issue, but it is certainly plausible, for a variety of reasons... 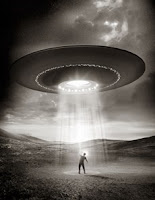 1. A UFO abduction could be used as an explanation for the Rapture.

Such encounters have been suggested for years, with many believing in them. In fact, recent films such as Jupiter Ascending describe a similar situation. Imagine if UFOs were seen in the skies around the world at about the same time as the Rapture, and eighty percent of the population believes in the possibility of extra-terrestrial intelligence, wouldn't this be a powerful form of deception? We know that the rapture of the Church will be accompanied by "...fearful sights and great signs...from heaven" (Lk 21:11). While we can only speculate about the nature of these events, one thing is for certain, the appearance of alien ships in the skies of planet Earth would be the greatest shock in the history of mankind.

2. Extra-terrestrial presence could successfully stage the appearance of the Antichrist.

Based on the propaganda of Hollywood, with its movie plot lines driven by the usual premise—the Earth is in grave danger from either an inside or outside threat; alien saviors arrive just in time to help mankind; sometimes they are good…sometimes bad—much of the world is primed now to accept the arrival of an "alien savior". Could this be the Antichrist, who appears to be the savior of the world (Revelation 6:2)?

Now, we know the Antichrist will be a man (2 Thess 2:3). However, this does not preclude people believing that he is an alien. In fact, one of the three main alien characters (along with reptilian and a grey) - the “Nordic alien” - looks like a beautiful (almost angelic) human!

According to Wikipedia, the Nordic aliens resembled the people of the Northern European countries and are often described as benevolent beings who have telepathic powers, claim creation of humanity, and are concerned about the Earth's environment or prospects for world peace. This all sounds very much like the Antichrist [the Antichrist will be European (Daniel 9:26), likely claim creation of mankind (2 Thessalonians 2:4), and bring false world peace (Daniel 9:27)].

3. The alien phenomenon MAY have been mentioned in the Book of Revelation:


It’s rather strange that John refers to unclean spirits, who go forth to deceive the rulers of the Earth (Rev. 16:14-19, 21), as frogs. But note that John doesn’t say the three evil spirits ARE three frogs. He says they looked like frogs. Could it be that John was describing 20th and 21st century depictions of aliens as “Little green men” in 1st Century language? Did John see demons, looking like aliens?


The culturally common image of a “gray alien” not only looks much like a frog, but also shares some strange similarities:

4. Pope Francis and the Vatican are preparing for the arrival of an alien savior.

The False Prophet, whom many believe to be the pope in charge of the Vatican (Roman Catholic Church), will play a central role in the coming deception (Revelation 13:13; 2 Thessalonians 2:9-12), and it seems Satan will have the false prophet, through this great deception, carry out his one primary mission - to promote and sell the Antichrist (alien savior?) to the world (Revelation 13:12).

Interestingly, Pope Francis and the Vatican are not only expecting an alien savior to arrive shortly from some place outside of Earth, but are actually preparing for his arrival and getting ready to renounce the one that they claim to follow! Is it just me, or is that the most bizarre thing that you've ever heard?

For centuries, the Vatican has been searching for extraterrestrial life, with the most powerful telescopes in the world, and acquiring information such as manuscript evidence and possibly relics, which may link the aliens with Earth history. The Vatican is now preparing and monitoring the approaching alien savior with the most powerful telescope in the world - the "L.U.C.I.F.E.R." telescope. The Catholic Church plans to embrace the new 'savior' and encourage religious people everywhere to do the same by reassuring them that the new ET reality doesn't negate the word of the Bible and Jesus Christ as the son of God. For example, the Vatican claims Jesus was an alien (a “star child”) and that the virgin birth was one of the earliest documented cases of alien abduction/visitation. Is all of this REALLY just a mere coincidence?

And there are many more reasons. I didn't even mention how an alien threat, perhaps by the greys and reptilians (which are generally malevolent in nature), would create the need for a world government, or how an alien attack could be used as an explanation for God's judgments during the tribulation (consider especially the humanoid demonic creatures of Revelation, chapters 8 and 9)...

Could It Be the Strong Deception of the End Times?

Again, all of this is merely speculation, and the current UFO phenomenon may be nothing more than a deception; not the strong deception of the end times. However, given that this deception has been very slowly and surely developing generation by generation, and now Satan through Hollywood is conditioning the masses to accept the reality of UFO/alien presence as normal (which is so serious one has to ask, "why"?), this scenario is a very real possibility.

It is also interesting that the famous alleged crash of an alien spacecraft took place at Roswell, NM in 1947 (sparking the UFO phenomenon) and Israel once more became a nation in 1948. When Israel became a nation again, Satan knew that his time was short and the Lord would be returning soon!

Whatever the case may be, I believe we are witnessing the same basic activity of demon possession that occurred in Noah's day (Genesis 6:2; 4), but in a somewhat varied form under the guise of "UFO's and aliens from another world", and since Jesus said He would return at a time when society resembled “the days of Noah” (Matthew 24:37), we see yet another sign that He’s coming soon.

Do not be deceived. Jesus is coming!