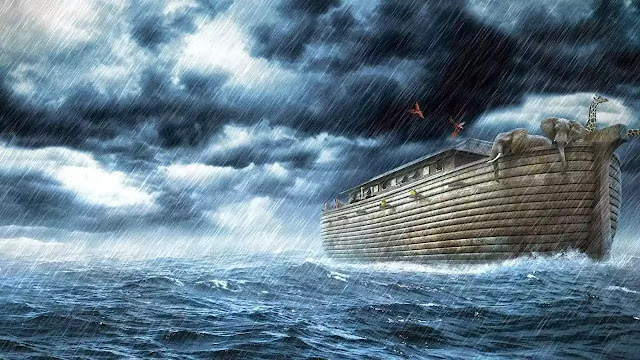 The Bible clearly depicts that the entire world was flooded in the days of Noah:

“The waters prevailed exceedingly upon the earth; … and the mountains were covered.” (Genesis 7:19-20)

And there's a flood of evidence for it…

Fossil formation is extremely rare today, as dead organisms rot, decay and are consumed quickly unless rapid burial or other unusual conditions are present. Yet, the rocks of Earth contain billions and billions of fossils from the past…

And most are found in ENORMOUS fossil graveyards! For example, the Karoo formation in South Africa, alone, contains fossil remains of about 800 billion animals!

Often the fossils in these graveyards come from widely separated and differing geographical areas and habitats, only to be thrown together in disorderly masses. For example, the Ashley Beds is an enormous phosphate graveyard that contains mixed remains of man with land and sea animals, including dinosaurs, whales, sharks, elephants, and many others. How could this have happened unless the waters of a global cataclysm swept over both the oceans and the continents?

Take a look at this whale fossil in the middle of the desert... 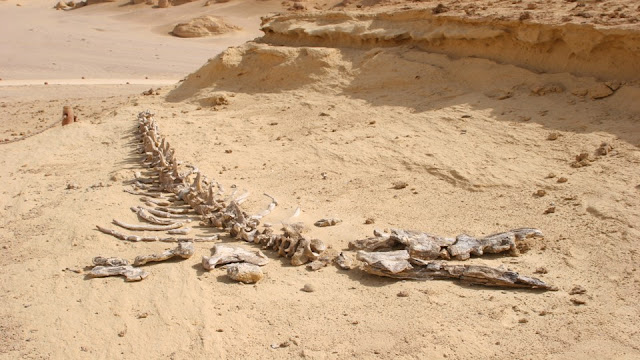 How did it get there, and what kind of catastrophic event would need to take place to rapidly bury a whale, or many whales in a whale graveyard?

Rock layers all over the world also show evidence of rapid deposition. For example, the walls of the Grand Canyon have rock layers that are bent and folded, suggesting these layers were immediately folded while the sediment was still soft and pliable—as would be expected during a global flood.

Other rock layers show little or no erosion, such as the Coconino Sandstone and Hermit Formation which are separated by a completely flat and featureless several mile-long boundary, suggesting continuous deposition of one layer after another.

Fossils are so widespread that we even find fossils of sea creatures on every mountain range, including the highest place on Earth, the peak of Mount Everest (8,848 meters above sea level)! In fact, the vast majority of all fossils unearthed on Earth are sea creatures—which is expected since it was a marine catastrophe (Gen. 6:7). How did they get there, unless the ocean waters rose up over the continents?

Not only is there no erosion between rock layers, but there is also mass erosion across vast areas of the continents. For example, the Grand Canyon is 4-18 miles wide and over 1 mile deep. Compare the thin river with the canyon’s vast expanse (see picture on left). Could that relatively small river carve such a huge, wide, and deep canyon (as evolutionists claim)? If so, where did all the dirt go—2,800 cubic miles of it?

We find the sedimentary layers eroded from the Grand Canyon, and other distant sources, extending for thousands of kilometers, even across continents. For example, the chalkboards that form the famous white cliffs of Dover in southern England trace all the way to Turkey and Egypt. Another example is the Coconino Sandstone, which is conservatively estimated at 41,700 cubic kilometers! The sheer size and extent of the layers tells us that they could not have been formed by rivers, nor river deltas—except perhaps a global flood!

We find that the sediments in these vast sediment layers are carried long distances. For example, the sand grains in the Navajo Sandstones come from the Appalachian Mountains, all the way across North America (at least 3000 km)!

We also find many ENORMOUS boulders throughout northwestern USA and Western Canada which are at least 500 kilometers away from the nearest source of quartzites rocks! What sort of geological event could transport large boulders and sediments over thousands of kilometers, other than a global flood?

Did you know that stories about a worldwide flood are found in historic records all over the world? Anthropologists have catalogued over 500 ancient flood legends from all over the world, from the ancient Babylonians to the Australian Aboriginals. These stories are similar to the Genesis narrative, including an angry "god" and 8 people who survived the flood in a “boat”.

Scientists who try to explain the past by looking at what they see happening today (uniformitarianism) cannot understand the many geological features around the world which are radically different from anything being formed today. Yet, the Bible can explain features from the past!

So why do secular scientists refuse to accept the obvious evidence for Noah's Flood? Peter gave us the answer to this question, 2,000 years ago:


"...all things continue as they were from the beginning of the creation. For this they willingly are ignorant of... the world that then was, being overflowed with water, perished." (2 Peter 3:5-6)

“all things are continuing as they were from the beginning of creation” is the law of uniformitarianism, which is what science teaches today. So the scientific world today does not acknowledge the destruction of the world by a universal flood, because it would destroy their entire thesis of origins.