Did you know that math is one of the most compelling proofs of God’s hand in creation? Most of us take it for granted that math works; some assume that mathematics is a mere human invention. However, other than developing different symbols and systems to represent math, man has NEVER created anything in math.

Mathematical truths (e.g. ‘‘2 + 3 = 5’’) existed long before man discovered it. For example, 2 + 3 = 5 was as true at the beginning of time as it is today. Indeed, it would be true even if there were never any human beings, even if there were never a universe! Yet, laws of mathematics are conceptual in nature; they have and can have no existence except when they are mentally conceived. So how can a conceptual entity like math exist before any mind is around to think it?

The answer is that math isn't the product of a human mind, but rather the product of the mind of God. Since God has always existed and thought, the laws of mathematics are also eternal, existing before people. I must stop and say it's no wonder Romans 1:20 tells us that it is ‘the things that are made” that reveal the attributes of God (that He exists). Math is also universal, immaterial and invariant because God is himself omnipresent, immaterial, and invariant.

As if that wasn't enough proof, mathematics is also embedded in the complex framework of ALL life and the entire superstructure of the natural world around us:

1. Fractals. The term "fractal" was first used in 1975 to describe the never-ending, infinitely complex, [often] self-similar, geometric patterns, which were generated from the simple mathematical equation: Z = Z² + C. It is only with the advent of modern computers that it has been possible to explore fractal structures created by mathematical equations, such as the one below:


Isn't that mindblowing? Just look at the intricacy, complexity (described as 'infinitely complex'), and wondrous beauty hidden within numbers! Only intelligence produces such things. The fact that numbers are merely concepts makes it even more phenomenal, and puzzling for the secularist! As this math professor at Bowdoin College said of fractals,


"When you look at the Mandelbrot set and see its chaotically intricate and beautiful design, you can’t help but feel that there is something larger than life going on here–that you are staring right at some unexplainable cosmic mystery."

But this is not surprising, a Christian expects to find beauty and order in the universe, not only in the physical universe, but in the abstract realm of mathematics as well. The verse “For by him all things were created” (Colossians 1:16) tells us God created all things. The word all includes everything, even math.

You may also have noticed some familiar shapes in the GIF above, since nature is full of fractals! You can find them in phenomena ranging from the structure of snowflakes, trees, clouds to coastlines and mountain ranges. It seems that some of the most complex, chaotic networks in nature are actually not random, but can be defined by fractals! 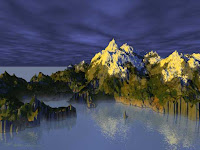 In fact, fractal geometry can be used to mathematically model creation. Today’s video games and special effects for movies are created using fractal geometry. This is how movies became more “realistic” over the past few decades (see the realistic mountain scene pictured on the right). Isn't it remarkable that the reality of these screen-worlds is possible only because they successfully mimic God’s creation? And still, when compared with the actual creation, they are ridiculously simple!

2. The Golden ratio and Fibonacci series. When we take any two successive (one after the other) Fibonacci Numbers (0, 1, 1, 2, 3, 5, 8, 13, 21, ... etc), their ratio is very close to the Golden Ratio 1.618 … This ratio (and numbers in the Fibonacci sequence) appears all over the natural world. You can find them in phenomena ranging from the shell of the chambered nautilus to hurricanes and spiral galaxies. See: The Golden Ratio: Amazing Proof of God


3. Even the laws of nature follow mathematical rules. As scientists record what they observe, most often they are not just using words and paragraphs. The laws of nature can be documented with numbers. They can be measured and computed in the language of mathematics.


Galileo, one of the founders of modern science, was right when he said:


“The Universe is written in the language of mathematics”

The very existence of math is a miracle, let alone the correspondence of conceptual mathematical laws to material things!

There can only be one conclusion: the correspondence exists because nature, mathematics and the human mind have one supreme link — they are all the created products of God, the Master Designer.

What will you do with God? Will you RECEIVE Him (John 1:12), or will you REJECT Him? (John 12:48) Your decision will determine your eternal destiny! Learn more: How To Receive Salvation