Since the end of World War 2, the stockpiling of nuclear weapons has proliferated worldwide; many countries now have the capacity to destroy all life on Earth many times over; and while World War 3 fears ignite across the globe after Taliban fighters take over the capital of Afghanistan, many Christians are wondering what the Bible says about World War 3. So, what does the Bible say? Will there be another world war? In the days of Noah, God poured out His judgment on an unbelieving world in a great flood (Gen. 6:17). The Bible makes it clear that God is going to judge the world again in the end times; only this time the world will be judged by fire, not by water (2 Peter 3:3-7). The final judgments of God are represented in the book of Revelation by the seven seals (Rev. 6:1-17; 8:1-5), seven trumpets (8:6-9:21; 11:15-19), and seven bowls/vials (16:1-21). These judgments, which are spread out over a seven-year period of time known as the “Tribulation”, are all connected to one another and get increasingly worse and more devastating as the end times progress.

Until the nuclear age, the predominant view was that God, Himself, will bring about these judgments supernaturally. However, many Bible prophecy experts are beginning to think that John’s visions of the trumpet and bowl judgments may in fact be describing, in perfect chronological order, precisely what is understood to occur during and after a large-scale nuclear war. In his book “There’s A New World Coming” (1973), Hal Lindsey writes:

“Although it is possible for God to supernaturally pull off every miracle in the Book of Revelation and use totally unheard of means to do it, I personally believe that all the enormous ecological catastrophes described in this chapter (Revelation 8) are the direct result of nuclear weapons. In actuality, man inflicts these judgments on himself. God simply steps back and removes His restraining influence from man, allowing him to do what comes naturally out of his sinful nature. In fact, if the Book of Revelation had never been written, we might well predict these very catastrophes within fifty years or less!”[7]

It’s worth noting that many Bible passages actually suggest that the events of the end times involve man’s own doing. For example, “…every man’s sword shall be against his brother” (Ezek. 38:21) and “…unless those days were shortened, no flesh would be saved” (Matt. 24:22). Having said that, there’s no reason to believe that God won’t directly inflict most or all of the disasters of the Tribulation just like He did with the plagues of Egypt (Exodus 7-11). So, keep in mind that what follows is speculation not facts...

The sixth and seventh seals take place during the “Great Tribulation” (the last half of the Tribulation), which is pictorially described in Revelation chapters 8, 9 and 16 as a series of trumpet and bowl judgments, and appear to announce World War 3’s escalation from a conventional war into a nuclear holocaust...

The breaking of the seventh seal in Revelation 8 introduces the seven trumpet judgments, which cause even greater catastrophes to come to the earth, along with thunderings, lightnings, and an earthquake:

5 And the angel took the censer, and filled it with fire of the altar, and cast it into the earth: and there were voices, and thunderings, and lightnings, and an earthquake.

The “fire of the altar” is a symbol of God’s judgment, that is now coming upon the earth, and which appears to be farther opened in the sounding of the trumpets. The “thunderings” could very well be the start of nuclear bombs exploding, and the “lightnings,” missiles lighting up the skies. Keep in mind that the writer John, being a First Century man, was describing things he had no knowledge of in the only terms he knew to use!

The “voices” signify the resulting confusion, commotions, distresses, and miseries among the earth’s inhabitants, as people from every segment of society “hid themselves in the dens and in the rocks of the mountains” (Rev. 6:15). Perhaps the population of Earth entering underground bomb and fallout shelters. Interestingly, in verse 1 John says...

1 And when he had opened the seventh seal, there was silence in heaven about the space of half an hour.

According to experts, intercontinental ballistic missiles (ICBMs) take about 30 minutes to reach their target, no matter where they are launched from.[1] That’s also the same amount of time it takes for nuclear fallout (radioactive dust and ash) to fall from the sky after a nuclear blast, in a phenomenon known as “Black Rain.”[6]
After this, the angels prepare to sound their trumpets...

The use of simile suggests that John was trying to describe literal things that he had never seen before by comparing them with things he was familiar with. His descriptions of “hail and fire,” “a great mountain burning with fire,” and “a great star… burning as it were a lamp,” sound a lot like nuclear weapons. A hydrogen bomb exploded in the ocean would look like a huge, flaming mountain smashing into the sea, and ICMBs re-entering the atmosphere would indeed look like stars.
John’s description of “hail and fire mingled with blood” (v. 7) is especially interesting. In a nuclear explosion, humidity in the air is instantly compressed into water and driven straight up into the freezing temperatures of the upper stratosphere—along with the blood of millions of people, who have been vaporized by the heat. It is then instantly frozen and falls back to Earth as giant chunks of ice mingled with blood! Revelation 16:21 tells us there’ll be gigantic hailstones weighing up to 100 pounds (or 45.35 kilograms). Did you know that hailstones weighing fifty kilograms were found during the nuclear tests in the 1950s?[7]
The effects of these three trumpets...

Nuclear driven firestorms could easily burn one third of the trees and all the grass on planet Earth. In describing the consequences of a nuclear war, secular author Jonathan Schell predicts “… a significant decrease in photosynthesis in plants around the world; the scalding and killing of many crops…”[11] in his book “The Fate of the Earth.”

The blood John describes may not be blood at all, but rather black rain. This could easily wipe out one third of all sea life. Schell also predicts, “… the extinction of many ocean species, among them some at the base of the food chain…”[11] At the same time, a third of the world’s warships may be destroyed, which is exactly what happened in World War 2![8]

11 And the name of the star is called Wormwood: and the third part of the waters became wormwood; and many men died of the waters, because they were made bitter.

The reference to “wormwood” hints at poison, and may refer to radiation poisoning. It’s also interesting that the star is called “Wormwood.” Did you know that the most infamous incident of radioactive contamination in human history-to-date occurred in 1986 at Chernobyl, which literally means wormwood in English?

This sounds very much like what is commonly called “nuclear winter,” where the smoke and material ejected into the atmosphere by even a limited nuclear exchange obscures the light coming in from luminous objects in space. This could also be why John describes the moon as looking like blood (Rev. 6:12). In their book “A Path Where No Man Thought,” two nuclear winter theorists actually suggest that, in a nominal nuclear winter, noon sunlight will be only one-third what it was before the war.[10]
John describes another effect in Revelation 6...

14 And the heaven departed as a scroll when it is rolled together; and every mountain and island were moved out of their places.

During a nuclear blast the wind is rapidly pushed out [displaced] for several miles, creating a vacuum at the center of the blast site. Suddenly, this wind, like a giant tidal wave, rushes violently back into the vacuum. The atmosphere literally rolls back on itself like a scroll![12]

At the same time, the explosions of these weapons can shake, displace and disrupt the earth’s surface for miles away, triggering earthquakes and moving mountains and islands.

The seven bowl or vial judgments, which are the final judgments of the Tribulation period, appear to parallel the above but show an intensifying of the judgments—likely the lingering effects of nuclear war. So incredibly dangerous is the potential of radioactive fallout that in fact the long-term cumulative effects of lethal radiation would far exceed the immediate blast effects of the exploding bombs. In Revelation chapter 16, we read:

2 And the first went, and poured out his vial upon the earth; and there fell a noisome and grievous sore upon the men which had the mark of the beast... 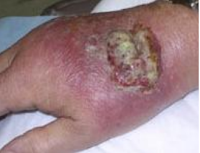 According to Schell, “In the weeks after the [Hiroshima] bombing, many survivors began to notice the appearance of petechiae—small spots caused by hemorrhages—on their skin. These usually signaled the onset of the critical stage of radiation sickness.”[11] Contact with beta-emitting fallout dust caused horrible, festering sores that would not heal.[5] It is possible that this “noisome and grievous sore” is the result of radiation sickness.
In fact, the RFID chip (which may be involved with the Mark of the Beast) is powered by a tiny lithium battery; and if this was to leak inside the body due to atomic radiation, a sore would form at the implantation site.[2] Interestingly, everyone who receives the Mark of the Beast will have this sore (v. 2).

8 And the fourth angel poured out his vial upon the sun; and power was given unto him to scorch men with fire. 9 And men were scorched with great heat, and blasphemed the name of God, which hath power over these plagues: and they repented not to give him glory.

10 And the fifth angel poured out his vial upon the seat of the beast; and his kingdom was full of darkness; and they gnawed their tongues for pain, 11 And blasphemed the God of heaven because of their pains and their sores,

The expression “full of darkness,” which is literally translated “to blind or to obscure,” may be referencing the painful effects of photophthalmia (UV-induced eye damage). Paul Ehrlich and other biologists wrote, “Protracted exposure to increased UV-B may induce corneal damage and cataracts, leading to blindness in human beings and terrestrial mammals.”[4]
At the same time, cancerous melanomas could compound the festering sores from radiation burns.[3]
Is it merely coincidence that John described the effects of nuclear warfare in sequence?

Bible prophecy actually speaks of several wars that will occur in the end times, including the Psalm 83 and Ezekiel 38 wars. It is likely—in fact almost certain—that the conventional war of the Tribulation, which may escalate into a nuclear holocaust, will come to be known as World War 3.
Whatever method it may be that God uses to bring judgment, whether man inflicts it on himself or God does, it’s clear that a catastrophic time of upheaval and suffering—unlike anything the world has ever seen before—is coming (Matt. 24:21). I actually think the fact that we have not yet seen a nuclear war since 1945 can be attributed only to the restraining hand of Almighty God, which is going to be lifted very soon!

If you haven’t already repented of your sins and put your faith in Jesus Christ as Lord and Savior, now is the time to do so—so that you can escape all these things which are about to come to pass (Luke 21:36).

“But the day of the Lord will come as a thief in the night; in the which the heavens shall pass away with a great noise, and the elements shall melt with fervent heat, the earth also and the works that are therein shall be burned up.” (2 Peter 3:10)