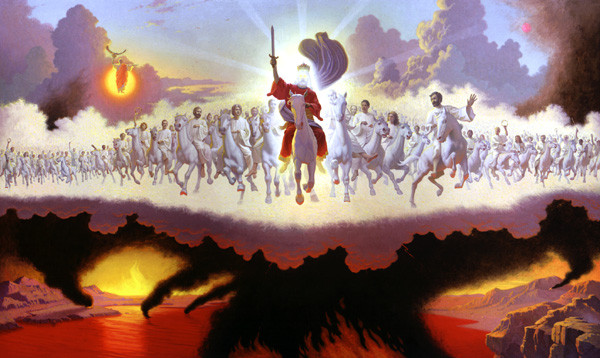 Though Israel was scattered to the four corners of the Earth in 70 A.D., God said that in the end times:

“I will take the Israelites out of the nations to which they have gone, and I will gather them from all around and bring them into their own land. I will make them one nation in the land.” (Ezekiel 37:21-22)

Incredibly, on May 14, 1948, Israel became a nation! The fact that, for almost 2,000 years, Israel did not assimilate completely into their surrounding societies and cease to be a recognizable people group, and that the land never became a homeland for any other people group, can only be explained by a miracle!

“Israel will bud and blossom and fill the whole earth with fruit.” (Isaiah 27:6)

Today, Israel is known as the fruit basket of Europe. She exports over 1200 million dollars worth of fresh produce each year, including over $200 million in flowers and ornamental plants! She also has the best security and technology.

The fact that the vast desert wastelands, which would never produce for any other people group, are suddenly producing flowers and fruit when Israel moves back in is another miracle!

“Until the end times, when many shall run to and fro, and knowledge shall increase.” (Daniel 12:4)

Until the early 20th century, the fastest mode of land based transportation was a horse. Yet today, we can travel to the other side of the earth in a matter of hours! Millions and millions are running to and fro by car, bus, plane, train, subway, etc. just as Daniel prophesied!

All this would not be possible were it not for the dramatic increase in knowledge over the past century. For all of human history right up until the early 20th century, human knowledge doubled approximately every century. Yet today, it’s doubling every 13 months thanks to the advent of the Internet, and the build out of the “internet of things” is expected to result in the doubling of knowledge every 12 hours!

2,000 years ago, John prophesied regarding the “Kings of the East” (China) who come against Israel during the Great Tribulation:

When John wrote Revelation, it would have been staggering to even attempt to imagine an army of that size; this was the approximate population of the world at that time! It would have been unthinkable even 100 years ago.

“And there will be famines, pestilences, and earthquakes in various places. All these are the beginning of sorrows.” (Matthew 24:7-8)

Note that the Greek word for “earthquakes” also refers to violent storms involving wind and water (see—Mark 4:37). The metaphor of “birth sorrows” implies that these natural disasters will increase in both intensity and frequency in the end times, and that is exactly what is happening (see graph below). And no, this is not because of man-made climate change, which is likely part of the end time deception (2 Tim. 3:13; 2 Thess. 2:10-11). 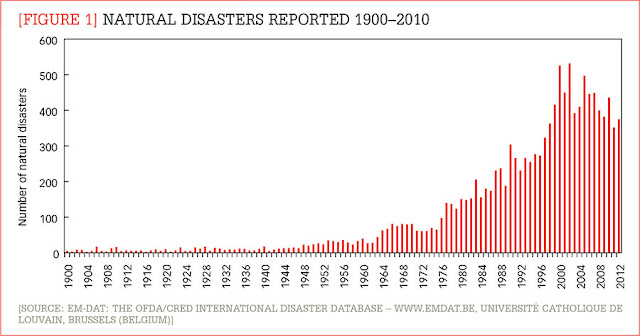 Jesus warned that the last days would be like the days of Noah (Mat. 24:37; Luk. 17:26), which were characterized by unprecedented evil and violence (Gen. 6:5,11). It’s hard to comprehend how rapid the increase in wickedness and violence has been in the past 40 years...
Abortion is now legal in most countries, and 56 million children (1 in 4) are murdered every year via abortion—which is as many children as people died in all of World War 2! A total of 38 wars or civil wars are currently raging worldwide and, in fact, more people died in the 20th-century due to war and violence than in all the wars previously combined (231 million people compared to 40 million)! The entertainment industry is producing the most violent, vile, and pornographic movies and television shows of any era. Crime and criminal networks are rampant in every nation on the planet (violent crime has increased nearly 500% since 1960 in the U.S. alone). Terrorism and mass shootings are claiming thousands of lives each year since the advent of international terrorism in 1970...

But the most dramatic way I can think of to illustrate how rapid the wickedness and violence has become in America is to consider the results of two polls concerning the top public school discipline problems, one taken in the 1940s and the other in the 1980s. Consider the drastically different results:

1. Talking
2. Chewing gum
3. Making noise
4. Running in the halls
5. Getting out of turn in line
6. Wearing improper clothing
7. Not putting paper in wastebaskets
Mid-’80s

Jesus also warned that the last days would be like the days of Lot who lived in wicked Sodom (Luk. 17:28-30), which were characterized by the widespread culture and promotion of the homosexual lifestyle (Gen. 19; Jud. 1:7). Isaiah 3:9 says,

“They parade their sin around like Sodom; they don’t even try to hide it”

While they were once content with keeping their “filthy” deeds hidden from public view, today, the homosexual agenda is paraded and forced upon our entire society. Thousands trumpet their “gay pride” each year through countless marches, parades and festivals. Schools teach it as normal and acceptable behavior. The entertainment industry prominently features homosexual themes and characters in major television shows. Science works overtime to validate homosexuality—looking for the gay gene. Religion tries to justify it with modern translations and interpretations of Scripture. And, of course, homosexual marriage has been legalized in 30 countries since 2001.

2,000 years ago, John prophesied that the two witnesses who preach the gospel during the Tribulation will be seen by the entire world, LIVE, over the span of three and a half days when they are killed:

“For three and a half days, all peoples, tribes, languages, and nations will stare at their bodies.” (Revelation 11:9)

Today, with the advent of mass media and global satellite networks, allowing news to travel the world at the speed of light, this is literally possible for the first time in world history! Remember, back when John prophesied this, news traveled at the speed of horseback!

By the way, the Book of Job, written 4,000 years ago, suggests that electricity can be used to actually send messages:

2,000 years ago, John prophesied that the Antichrist would control all commerce:

“No one was allowed to buy or sell things unless he bore the mark of the beast...” (Revelation 13:17)

The only way a person could control all of global commerce is by instituting some sort of cashless society. Today, with the advent of electronic funds transfer, electronic banking, and the widespread use of debit and credit cards, this is literally possible for the first time in world history! In fact, not only is a cashless society possible—it’s inevitable. And remember, this prophecy was penned 2000 years before our computer-driven society, at a time when you couldn’t have even dreamed how a person could control all commerce!

“He causeth all, both small and great, rich and poor, free and bond, to receive a mark in their right hand, or in their foreheads.” (Revelation 13:16)

Today, a growing number of people are implanting RFID chips, the size of a grain of rice, into their hand, which will act as a credit card! About 30,000 to 50,000 people already have these chips implanted, and experts say eventually everyone will get a microchip implant.

Jesus also told his disciples regarding the end times:

“And unless those days were shortened, no flesh would be saved.” (Matthew 24:22)

Consider that when Jesus made this prophecy the weapons of His day were swords and spears. But today, with the development and stockpiling of nuclear weapons and other weapons of mass destruction, it is possible to wipe out all flesh on planet earth. The fact that we have not yet seen a nuclear war since 1945 can be attributed only to the restraining hand of Almighty God!
See: World War 3 in Bible Prophecy

The odds of just six of these predictions being fulfilled in one generation has been calculated at 1 in 15.6 billion! It has been estimated that there are some 2500 prophecies in the Bible, almost 2000 of which have been fulfilled to the letter. No other book (the Koran, Book of Mormon, etc.) even approaches the track record of the Bible when it comes to fulfilled prophecy! It’s just another confirmation of the infallibility of God’s Word!
See hundreds of more end time signs here.